Caster Semenya was the shining light for a handful of South African athletes on Diamond League duty in Oslo, Norway, on Thursday night.

The Rio Olympics gold medallist blasted to another gold at the annual Bislett Games, winning the 800 metres in a fine 1min 57.59sec.

Semenya employed her usual tactics of sitting and waiting, after the pacemaker had taken the strong line-up through halfway in 57.49sec.

Both her fellow Rio Olympic medalllists, Francine Niyonsaba of Burundi and Kenya’s Margaret Wambui, were in the field, but try as they might they were no match for Semenya’s strength.

Coming off the final bend she fired up the after-burners and hit the front before another imperious victory.

Niyonsaba, her race number bizarrely pinned upside down, clocked 1:58.18 for the silver, and Wambui 1:59.17 for bronze as five of the field dipped under the two-minute mark.

Also in the main programme was LJ van Zyl in the 400m hurdles.

After having struggled in the build-up to the event with bad sinus problems, Van Zyl ran seventh in 49.89sec, as local hero Karsten Warholm ran to a Norwegian record of 48.25.

Van Zyl, watched back home by No 1 fan Louis junior, was in lane eight immediately adjacent to the speeding Scandinavian.

‘I was just flat in the race,’ explained Van Zyl during his five-hour train trip to Stockholm for his next Diamond League assignment on Sunday.

‘I had to withdraw from that Finnish race on Tuesday because of the cold/flu/sinus problems. But I’m feeling better now, just a bit of a cough.

‘As for the race, I think I ran OK under the circumstances and the bonus was the fact that it was my 150th time under 50 seconds, so I’ve definitely been blessed with a great career.’

‘The Norwegian guy ran very well. He recently ran a 44.8 for 400m, so you can see what form he’s in. He has a great future and excellent hurdling technique, definitely one of the guys to look out for at World Championships in London.

‘Looking ahead to Sunday and I’m keen to compete there. I really wanted a sub-49sec in Oslo as I haven’t run a 48 this year, but we’ll just do our best in Stockholm.’

The only other South African in main programme action was national 400m champion Pieter Conradie.

It was his Diamond League debut and he ran a 46.16 for seventh spot, a second outside his personal best.

There was still African glory though, as Botswana’s Baboloki Thebe won in 44.95, the only finisher under 45sec.

‘Yes, it was a tactical race with just a few local athletes, so I’m ready for Sunday’s Stockholm date,’ said Van Rensburg, who pretty much approached Thursday night’s race as a starter for Stockholm.

‘Conditions were great for running, 25 degrees and a light breeze. The weather in Spain is awesome and I’m loving this country so much.

‘The only bad thing was the track, it truly felt like concrete and was bad for all the athletes. But I got through it fine and am now looking forward to my next race in Bratislava on Saturday.’

The only other South African in action at that meeting was one-lapper Thapelo Phora, who won the B race in 46.13.

Commenting on his compatriot’s race, Fredericks said: ‘He had a good race for a first-timer in Europe. I was surprised the meet put him in the B heat. He beat those guys by far, and running by himself he clocked 46.11. Had he been in the A race, which was won in a 45.34, he could have run a sub 46s. He looks good and feels confident for his next race in Copenhagen in few week’s time.’

And another SA sprinter, Carina Horn, has expressed satisfaction after her third spot over 100m in Sunday’s World Challenge event in Hengelo, Netherlands, with an 11.35 finish.

‘Yes, I’m pretty happy with my race under the circumstances. We ran into a 1.3m/sec headwind, so I’m satisfied, after a difficult travel to the event. My first 50m was good, if I wasn’t even, I was ahead after the blocks so I’m happy that stuff I’m working on is coming through in the races .. now I’m racing in Germany on Friday again.’ 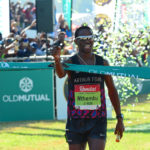 Mthembu aims to ‘Stagger’ in search of Comrades glory

Tokyo looms, again, We don’t know for sure in what shape of form the Olympics and Paralympics will take place in July to September and if anything 2020 taught us to take nothing for granted. What we do know is that if Tokyo 2020 +1 does go ahead, it will do so against a new-found back drop where simply taking… END_OF_DOCUMENT_TOKEN_TO_BE_REPLACED