Three-time Paralympian Phillippa Johnson will go into the festive season break cock-a-hoop after a great equestrian victory in Belgium at the weekend.
Johnson, a double gold-medallist at the 2008 Beijing Paralympics, was in action on both of her mounts, Lord Louis and Verdi.
‘Yesterday we rode at the CDR Alken and this was the last competition of the year for Lord Louis who I must say did a very nice test, not worlds but nice,’ she told Road to Rio 2016.
‘He is definitely becoming more rideable in the ring. We competed in the M10, where there were 13 horses and we finished fourth with 67.71% and that with a couple of costly mistakes!’
On to Verdi though and it was less about mistakes but more about victory.
‘For Verdi it was a warm up for the up and coming CDI3* in Roosendaal. There were six horses in the Prix St George.
‘I have to say he gave me one of the best rides ever, he was fantastic and we won with a super 71.31%,’ concluded Johnson. 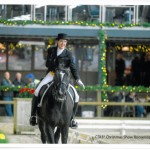 Paralympian Johnson steps up to next level with Verdi

Tokyo looms, again, We don’t know for sure in what shape of form the Olympics and Paralympics will take place in July to September and if anything 2020 taught us to take nothing for granted. What we do know is that if Tokyo 2020 +1 does go ahead, it will do so against a new-found back drop where simply taking… END_OF_DOCUMENT_TOKEN_TO_BE_REPLACED