Cummins, from previously having no ranking, is now ranked 12th on vault (fourth in the Commonwealth rankings) and Beckett fourth on floor. Beckett has improved substantially from 24th on vault to second compared to the 2012 rankings and is now also ranked 49th on uneven bars.

Beckett and Cummins, right, are now ranked second and fourth respectively on vault in the Commonwealth.

“This is great news and we need medals from gymnastics next year as we need to improve our position in the Commonwealth,” said Gideon Sam, president of the South African Sports Confederation and Olympic Committee (SASCOC).

“Kirsten will spend two months in Phoenix, Arizona, during December and January and we are in the process to arrange for a training camp for Claudia as well,” said Ilse Roets, the duo’s coach.

According to Roets, only Beckett is on SASCOC’s Operation Excellence Programme (OPEX) and she’ll approach the South African Gymnastics Federation (SAGF) to also get Cummins on the programme in order to assist the talented matriculant financially to get top international coaching before next year’s African championships and Commonwealth Games.

First requirement for the girls to book a place at next year’s Commonwealth is for them to be in the top five on apparatus, meaning things are looking good for the two Johannesburg gymnasts. 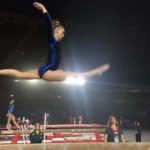 Bianca stars for SA in Tshwane