Right now, the name Margo-Chené Coetzee might not mean anything to fans, but the Tuks athlete might just be the one to help revive interest in South African athletics women’s field events.

At the national championships at Tuks, Pretoria on Thursday, the 23-year-old won the women’s hammer throw with a distance of 58.97 metres. That performance ranks her fourth on South Africa’s all-time list.

Her best is undoubtedly yet to come. For the past three years, she’s been battling a severe back injury that made it near-impossible for her to throw. But she was never going to give up on her dreams.

It was Renaldo Frechou – Tuks hammer throw coach and athlete – who has helped her change her technique to such an extent that she is not in constant pain every time she throws. Coetzee has made peace with the fact that pain is forever going to be part of her life as long as she competes, but at least now it’s bearable and she’s confident of being able to throw further.

‘There are still a few small things in my technique that I have got to work on but if I get that sorted, there’s no reason why I can’t get past 60 metres. Something I have to work on is to keep my emotions intact after throwing a big one. I shouldn’t allow myself to get sidetracked afterwards.’

South African 100m champion Akani Simbine (Tuks) withdrew from running Thursday’s semi-finals due to a hamstring problem. Apart from defending his title in the short sprint, he was also scheduled to race the 200m and compete in the 4x100m relay.

Werner Prinsloo, who coaches Simbine, emphasised that the Tuks sprinter’s injury is not severe. ‘As it’s still early in the season, we just felt it would be unwise to take any unnecessary risks which could lead to him not achieving the goals he had set himself.’

Prinsloo is confident that Simbine will be able to race at next weekend’s last Grand Prix meeting. 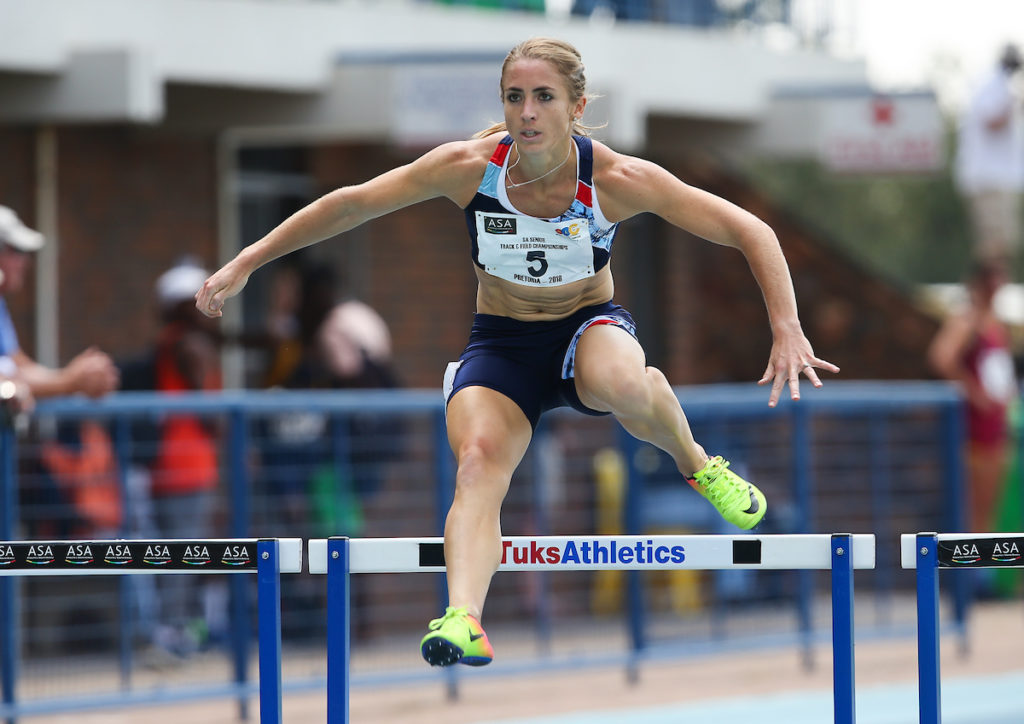 Wenda Nel (Tuks) is definitely in good form. She won her heat in the 400m hurdles in a time of 54.96s which is 0.35sec faster than the time she ran at last week’s Grand Prix meeting. Afterwards, she said she felt she could have run an even faster time.

‘After I had finished, I wasn’t tired. There was something left in my legs, and that is exciting. I purposely pushed myself hard in the heats because I realise that at the Commonwealth Games, there’s not going to be such a thing as an easy race. I’ve got to get used to pushing myself to the limit if I have any hope of qualifying for the final.’

Hanekom (Tuks) was the fastest in the heats, running 49.39 – the second fastest of his career.

Jobodwana quick off the mark in US sprints