Only mad dogs and South Africa’s top marathon kayakers would venture outside in the winter conditions currently hitting the Cape coast.

But on the Keurbooms River outside Plettenberg Bay is where you’ll find the current crop of paddling stars, a line-up unparalleled in South African history, and there will be an impressive four World Senior Marathon Champions racing his weekend. Not many other countries can boast this amount of talent at their national championships, with two Junior World Champions and a number of medallists thrown in for good measure.

Saturday sees the running of all the K1 events, from Guppy and Junior paddlers all the way through to the Grandmaster category. The standard international marathon lap is 4.3 kilometre long, with each lap including a portage of between 100 and 150 metres. Senior men complete seven laps with seven portages for a total distance of 30km, while senior women race six laps.

Also on the K1 start line will be reigning K2 World Champions Ant Stott and Cam Schoeman, as well as 2007 Junior World Champion Grant van der Walt, who was second at the Junior Worlds last year. Schoeman is concentrating on sprinting this year, and will be racing in the new Under-23 category, which is one lap shorter than the senior course. 1999 Junior World silver medalist Len Jenkins has also been in good form recently, and is well capable of pulling off victory. The winner is most likely to come from one of those six names, and with little separating each of them it will come down to whoever is feeling best on the day.

The women’s K1 event gets underway five minutes after the men’s start, and features four Beijing Olympians in Jen Hodson, Carol Joyce, Michele Eray and newly crowned World Cup Sprint champion Bridgitte Hartley. Again, one of these four is most likely to take the win, although Western Cape stars Lindi-May Harmsen, Robyn Kime and Bianca Beavitt will be pushing them all the way.

The juniors are traditionally well represented and highly competitive at the national events, and with youngsters like Brandon van der Walt, Murray Burgess, Martin van den Bergh, Stu MacLaren and Chrisjan Coetzee all raring to go, there will be no room for mistakes in the boy’s races. Melanie van Niekerk and Emma Horner will be the names to watch in the girl’s race.

The K2 races all take place on Sunday, and will dish up some formidable combinations. Rubenstein partners Stott in the men’s race at 12:30 and they will be favourites alongside the crew of McGregor and van der Walt. There are many who believe that one of these combinations will be standing on top of the World Championships podium in September.

However, there are a number of other strong K2 challengers, chief amongst them the two Western Cape boats of Graeme Solomon and Gavin White, and Lance King and PW Basson. The Eastern Cape’s Louw brothers, Greg and Ryan, are also well suited to this form of racing, with their portages a strong point in particular. Schoeman and fellow sprint partner Stu Waterworth round off the big names in the men’s race. In the women’s K2, Eray and Hartley find themselves slight favourites ahead of Hodson and Joyce and defending champions Harmsen and Abby Adie. Eray won bronze at the K2 World Championships in 2007 with Nikki Mocke.

Marathon Racing chairman Malcolm Stothard was excited about the upcoming weekend. ÔÇ£I think it’s going to be one of the better SA Marathon events because all the sprinters are here. It’s going to be a very high standard in the seniors, and the juniors are always super competitive too.ÔÇØ The marathon committee will select a team to represent South Africa at the Marathon World Championships, to be held in Porto, Portugal from 17-20 September.

Racing starts each day at 9am, with the national team announcement on Sunday at 3pm. Organisers are expecting cool and windy days, however the course is well protected from the predicted westerly winds and are hoping it won’t influence the racing much. 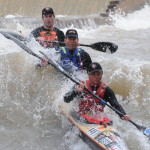 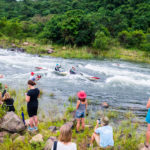 Relief for paddlers as Dusi gets guaranteed water

Tokyo looms, again, We don’t know for sure in what shape of form the Olympics and Paralympics will take place in July to September and if anything 2020 taught us to take nothing for granted. What we do know is that if Tokyo 2020 +1 does go ahead, it will do so against a new-found back drop where simply taking… END_OF_DOCUMENT_TOKEN_TO_BE_REPLACED