Lloyd Harris continued his dream run at the ATP Tour’s Dubai Championships when he reached the quarter-finals with a straight sets win over Filip Krajinovic, 7-6 (5), 6-4.

The 24-year-old South African came into the tournament as a qualifier but has reached the quarter-finals where he will face Japan veteran Kei Nishikora for the first time in his career. Win or lose, Harris will rise in the world rankings, where he currently stands at No81. He had earlier in the week beaten the top seed and world No4 Dominic Thiem for the biggest victory of his career to date.

The 31-year-old Nishikora is a former top 10 player who is currently ranked at No41. The No2 and No3 seeds, Andrey Rublev and Denis Shapovalov, are still ‘alive’ in the tournament.

Harris had been a break down in the first set against Krajinovic, the No14 seed, but he fought back to force a tie-breaker which he won 7-5. He then went on to see out the win in 1hr 32min, sending down 13 aces to his Serbian opponent’s three. 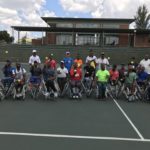 Aces pitch in their numbers for ‘very successful’ camp

Anderson, Raonic out to make history at French Open

Tokyo looms, again, We don’t know for sure in what shape of form the Olympics and Paralympics will take place in July to September and if anything 2020 taught us to take nothing for granted. What we do know is that if Tokyo 2020 +1 does go ahead, it will do so against a new-found back drop where simply taking… END_OF_DOCUMENT_TOKEN_TO_BE_REPLACED