South Africa’s Lloyd Harris has reached the third round of the men’s singles at the Australian Open in Melbourne after a five-set win in Thursday’s second round.

Harris, 23, is currently ranked 91st in the world, but is projected to move up in the rankings regardless of his results in the remainder of the tournament.

He will face American MacKenzie McDonald in Saturday’s third round.

Lloyd Harris is through to the third round of the men’s singles at the #AustralianOpen in dramatic style. The South African had to show real fighting spirit, as he edged Australian, Alexei Popyrin, 6-2, 1-6, 6-3, 6-7, 6-3, in a see-saw 3 hour match. pic.twitter.com/GOMyAhn6OH

South Africa’s only other men’s singles entrant, Kevin Anderson, lost in the first round to Italian ninth-seed Matteo Berrettini earlier in the week and South Africa’s double hope Raven Klaasen missed the tournament due to Covid-19.

Chani into third round 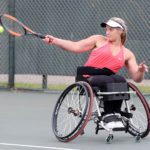 World’s stars will head to SA for wheelchair events

Tokyo looms, again, We don’t know for sure in what shape of form the Olympics and Paralympics will take place in July to September and if anything 2020 taught us to take nothing for granted. What we do know is that if Tokyo 2020 +1 does go ahead, it will do so against a new-found back drop where simply taking… END_OF_DOCUMENT_TOKEN_TO_BE_REPLACED