There were mixed fortunes for South Africa’s two men’s singles representatives in the opening round of the US Open at Flushing Meadows in New York.

Kevin Anderson, the 2017 US Open finalist, bowed out in the first round of this year’s tournament when he was beaten in four sets by No 5 seed Alexander Zverev, of Germany.

‘Kevin isn’t a guy you usually play in the first round. This is normally a fourth-round, quarter-final or semi-final match against him,’ said Zverev, who apologised for not immediately remembering to put on a mask during the on-court post-match interview.

Though Zverev reached his first career Grand Slam semi-final earlier this year at the only other major played, the Australian Open, the German is hardly bursting with confidence. Down to No 7 in the world from a high of No 3, his nerves showed at key points against the unseeded Anderson.

The other South African in the men’s draw, Lloyd Harris, struck 12 aces on the way to an impressive 6-4, 7-6, 6-2 victory over Italian Marco Ceccinato.

Next up for Harris is a tough second-round encounter with No 7 seed David Goffin of Belgium on Wednesday. Goffin beat American Reilly Opelka 7-6, 3-6, 6-1, 6-4 in his opener. 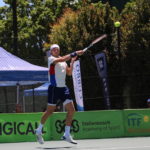