Bridgitte Hartley was the toast of the South African sprint kayaking squad as she won South Africa’s first ever World Championship medal in Halifax, Canada at the weekend.

The sprint queen claimed bronze in the K1 1000m final to cap off an outstanding individual year where she has announced herself as a potent force in women’s sprinting.

Having qualified for the A-Final by finishing in third place in her semi-final on Friday, Hartley was drawn in an outside lane for the main event on a windy morning against multiple Olympic medallists and world champions. However, she took the confidence of having beating a number of the competitors earlier in the year into the race, and managed to rise to the occasion in style.

New Zealand’s Erin Taylor and Denmark’s Henriette Engel-Hansen shot off the blocks, and Hartley found herself in seventh place by the first 250m mark. The Gauteng-based star is well known for her powerful kick though, and it came to the fore when it counted as she surged up to fourth at the 750m mark. Digging deep, she managed to pip Engel-Hansen into the final podium position, one second off the pace of race winner Katalin Kovacs from Hungary. Germany’s Franziska Weber took the silver medal.

Friday afternoon’s K1 500m semi-final had been a tough one for Hartley as she was drawn against some stiff competition. Her fourth place was good enough to secure a B-Final, which she went on to win solidly on Sunday, but she was hoping to make the A-Final in the Olympic distance event at the start of the regatta.

Hartley was not about to get carried away with her results though. ÔÇ£I must take this as another learning curve for the bigger picture to build on for the next few years. So far I have had a good year of training and racing, and all my competitors have many more years of racing and training in the bag already,ÔÇØ she said afterwards. Considering this is the first time she has competed at the World Championships in the 1000m and 500m events, there is much to look forward to.

The remainder of the results were a mixed bag for the South African team. Shaun Rubenstein had a frustrating K1 1000m semi-final on Friday, with a sixth place finish only enough to qualify for the C-Final where he came second. His budding K2 partnership with Mike Arthur was more successful though, as they qualified for the K2 200m A-Final by finishing third in their semi-final. In another fast and tight race on Sunday morning, the pair finished in sixth place to announce themselves as a crew to watch in the new Olympic distance. Earlier in the day, the two claimed third in the K2 500m C-Final.

The men’s K4 of Nick Stubbs, Len Jenkins, Nic Burden and Greg Louw had a promising weekend, the highlight of which was qualifying for the K4 1000m B-Final. The other team boat of Cam Schoeman and Stu Waterworth failed to progress through their K2 1000m semi-final races. In the 500m distance, Len Jenkins raced a good K1 semi to qualify for Sunday’s C-Final, where he had to settle for eighth spot. Greg Louw raced the short and sharp K1 200m event, and managed an encouraging fifth place in the C-Final.

Competition was definitely a step up from the May and June World Cups in Europe but the team acquitted itself excellently on the course, and team manageress Julia Thomas was proud of the squad’s achievements, ÔÇ£Finals days at World Champs is undoubtedly the pinnacle of the year for any athlete and apart from the Olympic Games, it represents the biggest stage upon which to measure up against the best of the best. Team SA took on the odds and staked its claim, and made us and South Africa so incredibly proud,ÔÇØ she said afterwards.

With another full year of training and conditioning, which will begin again later this year, there is much to be excited about for the core of this squad, and the experience gained from this year’s world-class competition will be a vital ingredient for the journey. 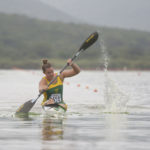 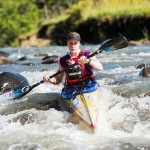 Esti and Co get great experience in World Cup