On the back of a stirring 2-1 win over Scotland in the quarter-finals, the mood in the Investec South Africa women’s hockey team camp is one of quiet confidence as they make final preparations for Saturday afternoon’s semi-final against Ireland in the Champions Challenge at Glasgow Green, writes Jon Cook.

ÔÇ£It was a great game for us, the manner in which we played was quite inspirational,ÔÇØ said SA head coach Giles Bonnet, pictured right with players celebrating the Scottish win.

ÔÇ£It’s great to see a new crop of players beginning to establish themselves, it takes time but we see suddenly a new group who are beginning to see opportunities and take their chances.

ÔÇ£What I like is the way the team has bought into a new style of play that is about speed, an aggressive brand in terms of playing direct hockey; going forward, creating a lot of goalscoring opportunities; we created close to 35 goalshots in the last four matches, more than any other side here, so we’re very committed to winning games.ÔÇØ

There was certainly a massive change in the team dynamic against Scotland, also seen in the stirring second half against the USA on day two, which resulted in a 2-1 victory snatched from the jaws of defeat.

The uncertainty, the hesitancy, in Pool B fare was evident in the patchy 1-1 draw with Spain ÔÇô as well as the 2-2 result against Ireland on day one. It’s almost like the SA girls need to get a bit annoyed, a bit of attitude, before they show their best hockey.

Bonnet is under no illusions: ÔÇ£Ireland are very tough, what they might lack technically, you cannot fault them in terms of mentality. A team that works well together, they are going to be a formidable opponent. But directly after the Scotland win I heard the players saying they’ve got to get that Irish score right.ÔÇØ

Apart from the heartening confidence shown against Scotland, what is exciting was the high energy of the entire team, exemplified by striker Sulette Damons and midfielder Shelley Russell, as well as the manner in which Lisa Deetlefs, in central defence and penalty corner strikes, and Anelle van Deventer in goal are making their presence felt during this tournament.

SA manager and goalkeeper coach Sheldon Rostron’s hard work is building depth in the stopper department, and the team has the luxury of a double Olympian, Sanani Mangisa ÔÇô having come back from a career-threatening injury ÔÇô on the subs’ bench.

ÔÇ£Anelle is physically big, tall, which helps a lot, is well-rounded as a keeper, while Sanani is a fighter who is doing well in training, it’s a step-by-step process,ÔÇØ Rostron said earlier.

SASCOC CEO Tubby Reddy was watching in the grandstand during the Scotland match and it may be a good omen if he can find the time in his busy schedule to take in the semi-final.

If the SA team can play with the same energy and urgency, attack the Irish when in possession and when not, the lasses from the Emerald Isle will be hurried into mistakes, which leaves the likes of Damons and Russell the time and space to counter-attack at speed.

The SA girls were the Bravehearts against the Scots ÔÇô and the hearts of braves will be needed against the feisty Irish, who shocked tournament favourites and world number eight South Korea 2-1 in the quarter-finals.

It’s an old saying that rings true to this day: Whoever wants it the most is probably going to get it.

Sunday’s bronze medal match is at 4.30pm SA time and the gold medal title match, and a place in the top-tier Champions Trophy, is at 6.45pm SA time.

All the matches enjoy live streaming on the FIH YouTube channel. 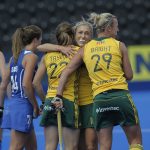 Under-21 hockey girls sunk by Spain at World Cup

By GARY LEMKE in Tokyo On the third day of staying in the Paralympic village bubble “it” finally dawned on me. “It” wasn’t the sheer visual aspect of the 4 000-plus Paralympians with disabilities all in the same environment of towering 17-storey apartments and surrounded by a 4km perimeter fence. Admittedly, that is the initial and most common conclusion of… END_OF_DOCUMENT_TOKEN_TO_BE_REPLACED