Michael Houlie is busy with his matric year at Bishops in Cape Town but before that milestone he’ll be graduating in a sporting sense.

Last year the teenager was part of Team South Africa at the Commonwealth Youth Games in Nassau, Bahamas where he was one of the team’s most successful swimmers, winning two gold and one silver medals.

This year he joins the big league after being named as part of Team SA for the Gold Coast 2018 Games in Australia.

An excited Houlie, who also had a successful tour of duty as part of Team SA at the 2016 AUSC Region 5 Games in Angola, says he can’t wait to soak up the experience.

‘Junior Commies was something special… being a part of a larger Team SA inspired me to perform and do my part.

‘Senior Commies is another honour…..it feels good to make the natural progression from junior to senior ranks – this is my last year as a junior and from next year it’ll will be 100% senior competitions so the more experience I get the better.’

‘I had a taste of it at the Africa Champs held in Bloemfontein in October two years ago and I know I can learn so much just by observing and being close to them – how to conduct myself, my mindset and many other smaller things that I won’t know yet.

‘I’m young and I can still improve a lot but for now I can go full out with no pressure and just enjoy the moment…..there are no limits.’

The die-hard Chelsea football supporter boasts a wise head on his young shoulders. ‘Commies is normally viewed as a ‘weaker’ competition [compared to Olympics], and while it might be the case in other events it’s not so in my events.

‘I’m going to be competing against the two greatest breaststrokers in the world over the last eight years (Cameron and Adam Peaty have cleaned up the big medals and world records, including the 2012 and 2016 Olympics) so what an honour it will be to compete against them when both of them are still fully competitive.

‘I can’t wait… I’m just so excited,’ concluded Houlie who is set to further his studies at Tennessee University in the US next year. 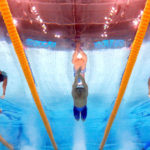