Robbie Hunter’s Garmin-Transitions team won the team category in the seventh and final stage of the Tirreno-Adriatico cycle race in Italy on Tuesday.

But in the general classification it was another story as the South African riders’ outfit ended 18th, 59min 15sec behind winning team Lampre-Farnesse Vini’s 92hr 39min 02sec.

On an individual level, Hunter ended the stage of 164km between Civitanova Marche and San Benedetto del Tronto in 10th spot behind Norway’s Edvald Boasson Hagen.

Overall victor of the tour was Stefano Garzelli who tied on time with Michele Scarponi but stage placings gave the former victory. It was his first Tirreno-Adriatico win and also his first win in two years.

Hunter ended 146th in the general classification, 1:33:17 behind the winner before hitting the road (in his car) for a 700km ride back home to Switzerland. 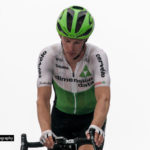 Another day of survival for Dimension Data

Tokyo looms, again, We don’t know for sure in what shape of form the Olympics and Paralympics will take place in July to September and if anything 2020 taught us to take nothing for granted. What we do know is that if Tokyo 2020 +1 does go ahead, it will do so against a new-found back drop where simply taking… END_OF_DOCUMENT_TOKEN_TO_BE_REPLACED