Team MTN/Qhubeka can feel satisfied with the way they rode Cell C’s Tour of South Africa. Daryl Impey (MTN/Qhubeka) not only finished third overall, he also won the king of the mountains competition. The riders of MTN Qhubeka made certain that they were the major role player in each of the seven stages with their aggressive riding.

ÔÇ£The Tour of South Africa was a great success for South Africa, for MTN Qhubeka and personally. It was a new tour which was added to our calendar and at the end of the day everyone who was a part of it enjoyed it and it’s definitely a race which will grow from strength to strength over the next couple of years,ÔÇØ Impey said. “The ‘ups’ far outweighed the ‘downs’.
ÔÇ£It is really important for me to thank my team mates and all the staff involved for making it a great week and helping me to secure the red King of the Mountains jersey and also finishing 3rd overall on the podium.”
ÔÇ£Teamwork is what┬ámakes a team and although it was basically our first race together we quickly got┬áour act together and raced┬ávery professionally.┬áIt’s great to be a part of a team that is 100% committed to one another and also racing to win.

ÔÇ£We might not have won a stage but each day we certainly tried and that’s the important part. It is a pity that we allowed Kristian House a big lead on stage 1 and we certainly learnt our lesson. Congrats to him and his team for racing a clever and well controlled race.

ÔÇ£I think SA cycling has definitely showed that we have the talent to race anywhere. All in all it was a positive week of racing, let’s hope we get more of these races in the future.ÔÇØ

Bradley Potgieter is definitely one of Team MTN/Qhubeka’s unsung heroes. For all of the seven days he was out there falling back to the team car to collect water bottles and, countering attacks, setting the pace at the front and, attacking while never thinking about personal glory.

Potgieter admits that it is hard work but immediately added that he loved every moment of it. ÔÇ£Riding for the team giving my all is what I love doing.ÔÇØ

According to Dennis van Niekerk the importance of not getting caught napping during a tour’s first stage was again proved during the Cell C Ttour.

ÔÇ£The first stage is where you set the foundations of riding a good tour. I have learned it over and over again. We all erred during the first stage when we allowed Kristian House to ride away from us gaining an advantage of more than two minutes. Hopefully we won’t allow it to happen again.

ÔÇ£Apart from the first stage I think we rode a good tour. We contested each stage and we were rewarded with a few podium finishes. Obviously we would have like to have won the tour and a stage, but it was not meant to be. The low point for me during the tour was crashing when I did.ÔÇØ
Team MTN/Qhubeka certainly had its fair share of bad luck. Dennis van Niekerk crashed during the third stage when he was still an overall contender; Reinardt Janse van Rensburg crashed twice during the fourth stage which also led to him dropping out as a GC contender and having to relinquish the jersey as the best u.23-rider.

Christoff van Heerden also had the unfortunate privilege of tasting tar when he least expected it. One of his worst tour moments was certainly losing time due to mechanical problems during the last stage. It was a stage that he could have won. 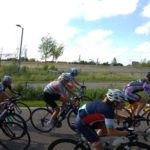 Top team takes on the men

Tokyo looms, again, We don’t know for sure in what shape of form the Olympics and Paralympics will take place in July to September and if anything 2020 taught us to take nothing for granted. What we do know is that if Tokyo 2020 +1 does go ahead, it will do so against a new-found back drop where simply taking… END_OF_DOCUMENT_TOKEN_TO_BE_REPLACED