The 20-year women’s marathon record might come under fire by 2012 Olympian Irvette van Zyl at the London Marathon (24 April).
The official women’s marathon record of 2hr 26min 35sec, set by Colleen de Reuck in Berlin on 29 September 1996, has been on the record books for nearly 20 years. Two years prior to that Elana Meyer (then Van Zyl) ran 2:25:15 at the Boston Marathon but that course is considered as being ‘aided’.
Van Zyl’s performances over the past two weekends are the reason why Lindsey Parry (head coach at Tuks/HPC) feels a new national record could be on the cards. On Sunday Van Zyl won the Johnson Crane half-marathon in Benoni in a time of 72min 20sec. Parry is not entirely sure, but he thinks it might be the fastest time ever by a South African female athlete at altitude.
Last week she won the George Claassen 10km in a time of 33:32, also a personal best for her at altitude.
An interesting question now is how much faster can Van Zyl run? Parry’s immediate answer is that she hasn’t even begun to run at her full potential.
‘Quite frankly, the times Irvette has been running don’t surprise me. She’s adamant she kept holding herself back on Sunday because she was afraid that I might get cross with her if she ran too fast. She believes that she could have run a much faster time.
‘Having watched her run during training sessions I tend to agree. I don’t think we are even close to getting her to run to the best of her ability at this stage. The problem in the past was that Irvette tended to be very injury prone and I think she was handicapped by the fact that she was not always managed correctly.’
Van Zyl, who is also a HPC-sponsored athlete, may have to compete in the SA Marathon Championships in East London. Parry does not foresee this to be problem.
‘The plan was for Irvette to do a three-hour training run a month before the London Marathon. We will just adapt our training schedule slightly so that she will now ‘jog’ the SA Marathon instead.  I want her to finish it in about three hours. If she can stick to the plan and there are no other unforeseen setbacks, I’m confident that she will be able to run something like 2:26 in London.’
Parry is not yet certain about how and when Van Zyl will try to qualify for the 10 000m in the Rio Olympics. He hopes to discuss it with the decision-makers of Athletics South Africa (ASA) next week.
Charné Bosman (Nedbank) won the Johnson Crane Marathon in 2:48:52. Parry, who coaches Bosman as well, considers the win as a bonus.
‘Our whole idea was to see how Charné’s legs would handle the pressure of being pushed slightly harder than during a training run and I’m satisfied.Charné main goal is to get a good result at Two Oceans. Afterwards I’m going to give her a short rest before she starts her preparation for the Comrades in earnest.’
Bosman was second in last year’s Comrades. 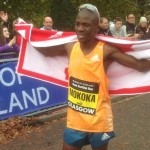