Kevin Anderson remains unbeaten at the Nitto ATP Finals in London after beating Kei Nishikori of Japan 6-0 6-1 in only 64 minutes in his second round-robin match.

However, due to Roger Federer’s straight sets win over Dominic Thiem in Tuesday’s second singles, Anderson still isn’t guaranteed his place in the knockout stage.

Anderson served a solid and strong persistent performance, and kept focus from the back of the court. The astonishing gulf in the score was the nightmare that Nishikori had, to only frame his forehand on the second point of the match.

The 32-year-old Anderson got 78 percent of his first serves into court, he didn’t face a single break point, and was rushing Nishikori throughout. And while the Japanese admitted he just had a day when he wasn’t feeling the ball and nothing worked out for him, Anderson claimed some credit.

‘It’s what it’s about these days,’ Anderson said after the match. ‘If you’re playing your tennis and stop your opponent playing their tennis and getting too comfortable, that’s what gives you the advantage. And when I can stick to my own game it definitely makes it harder for my opponent, regardless who they are, and I feel like I’ve done that really well, especially today.’

Anderson needed three bites of the cherry to break in the second game of the match. He over hit a forehand on his first break point, snatched at a backhand on his second, and was a shade lucky to see a Nishikori backhand drift long after a speculative approach shot. But from then on, the errors flowed from the Japanese’s racket.

Anderson will face Switzerland’s Roger Federer in his final group match on Thursday. With Federer having beaten Thiem 6-2 6-3, it means Anderson has two wins in the group while Federer and Nishikori have one each, with all four matches finishing in straight sets.

Like Anderson’s group, countback plays a role wether the pair qualify for the semi’s. If Klaasen and Venus beat Colombians Juan-Sebastian Cabal and Robert Farah on Thursday, they are through, but even winning one set in defeat might be enough, depending on the outcome of the Murray-Soares v Mektic-Peya match.

Photo: Anderson beat Nishikori 6-0 6-1 in only 64 minutes in his second round robin match, Supplied by ATP World Tour

Chani out in quarters 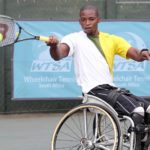 Another big award for Paralympian Maripa