There was both delight and disappointment at the Africa Junior Athletics Championships in Gaborone, Botswana on Saturday.

Team South Africa grabbed another eight medals on day three of the competition (four gold, three silver and one bronze) but firm favourite in the 200-metre, Wayde van Niekerk from Free State, had to withdraw before the final after injury in the semi-finals.

Van Niekerk made qualifying for the 200m semi-finals a breeze as he sailed over the finish line way ahead of his competitors.┬áHe finished in 21.19sec without much effort while his closest competitor finished in 21.82sec.

But during that semi-final Van Niekerk tore a hamstring and had to go out of the competition very disappointed.┬áWithin 10 minutes after the race Van Niekerk was walking and assured that it is nothing serious. ÔÇ£It is already a lot better and not that serious, it is just cramping,ÔÇØ said Van Niekerk. It is a minor tear, but medically a proper diagnosis of how long it will take to heal, can only be made after 48 hours.

Team manager, Danie Cornelius, said that South Africa had definitely lost a gold medal with Van Niekerk out of the competition. It will now be up to Siphelo Nqgabaza to get a medal for South Africa as he qualified for the finals. ┬áVan Niekerk will compete in the World Championships in August later this year and hopes are that he should recover before then.

An event-by-event breakdown of how Team SA fared on Saturday:

200m
Women
Sonja van der Merwe qualified for the semi-finals of the 200m easily when she won her heat in 24.14sec.┬á She will be joined in the semi finals by Zanri van der Merwe, finishing third (24.81sec) in her heat.

The semi-finals brought good news for both girls as they qualified for the finals. Zanri, running in lane seven, qualified behind Manedo Fantu Magiso (Eth) 23.76sec in a time of 24.49sec.┬á In the other heat Sonya finished first thrashing the Nigerian Uwakwe Nkiruka Florence in a time of 23.96.┬á Florence finished second (24.06) followed by compatriot Etim Mageret (24.41)

Men
In the 200m heats Nqgabaza went throught to the finals with a winning time of 21.19 ┬áfollowed by Abou El Khir Mohammed El said from Egypt (21.33).┬á Zambian Kafunda Titus, also qualified for the final due to a fast time 21.73. The final is scheduled to take place on Sunday.

Women’s hammer final
The South African women failed to finish in the top three as the battle of the North continued.┬á Egypt took gold and silver with Taha Rana Ahmad and Fahmy Nehal Kamal sent the hamer soaring to distances of 59.94m and 57.49m.┬á Not even 5 no throws between the two of them made a difference.┬á Gaddeh Nabiha (Tun) came third with her distance of 52.19.┬á Annemie Smith and ┬áMagdalene Louw never really came close as Smith threw a best result of 49.97m.┬á In the fifth place Louw sent the hammer 48.02m, almost 2 meters shy of her personal best of 51.90m.

Pole vault men
Miqael Cilliers claimed victory with his winning height of 4.90m a new championship record.┬á Team mate JF Burgers will probably kick himself in hindsight as he had to be happy with a silver medal. He did not even attempt a jump at 4.90m, thinking that he would easily clear 5m, but then going on to fail at all three attempts. Cilliers only succeeded on the 3rd attempt at 4.90m, also not clearing 5m, but earned him the first place. Harbaoui Hamza (Tun) claimed the bronze medal with his height of 4.40m.

In the first round of the 1500m, Danel Prinsloo qualified for the next round with her time of 4:37.89.┬á She did not qualified because she finished in the first four, but because of a fast time as she finished fifth in her heat.

110m hurdles
Tsepho Lefete won his heat despite an injured hamstring, limping over the finish line in 15.32sec.┬áHis closest opponent, Lomba Bilisi Florent (COD) followed at 15.40sec to qualify for the next round.┬á In another heat Werner Pretorius also finished 1st (14.05) to go through to the next round.┬áHe totally outran Tunisian Gharsalli Rami (14.52).

4x100m women relay
After the disappointment of the mens relay team being disqualified on Friday, the ladies had to be very cautious not to make the same mistake twice.┬áThey did not disappoint and thrashed Nigeria, Botswana, Namibia, Zimbabwe and Zambia to claim the gold in 46.11sec.┬áNigeria finished with the silver in 46.71 and Botswana in third place with 48.71.┬áZimbabwe ran well but had to be happy with fifth place as their changeovers were not smooth at all.┬áThey only finished in 49.90.

Javelin Men Final
Rocco van Rooyen, who represented SA at the Zone VI Games in Swaziland late last year, won the javelin final, his winning distance reaching a staggering 75.72m, one of his best throws.┬á Van Rooyen put so much effort into this that he fell over on more than one occasion, and even flat on his face once.┬áThe┬ámeasuring tape had to be adjusted as organisers did not prepare for such distances.┬á Team mate Dean Goosen finished second (68.80m) followed by Elshoubra Melisy Ahmad Sa from Egypt (68.45m).

Heptathlon
In the 100m hurdles, Inge Viljoen finished 5th (16.44sec) as she just could not keep up with her competitors from Egypt, Nigeria and Seychelles.┬áShe collected 661 points in this event while the winner of the event, Haris Radwa Fatv from Egypt, collected 825 points with her 15.13sec.
High jump: her third position earning South Africa 771 points
Shot Put:┬á fifth with 421 points
200m:┬á fourth with 737 points
After five events Viljoen is in fifth place of six with 2590 points

An assessment will be made on Sunday morning to decide whether Tsepho Lefete will be able to compete in the 110m hurdles. 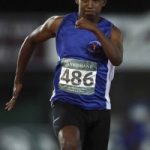 Buis blitzes to second gold and Hayes gets sprint double

By GARY LEMKE in Tokyo On the third day of staying in the Paralympic village bubble “it” finally dawned on me. “It” wasn’t the sheer visual aspect of the 4 000-plus Paralympians with disabilities all in the same environment of towering 17-storey apartments and surrounded by a 4km perimeter fence. Admittedly, that is the initial and most common conclusion of… END_OF_DOCUMENT_TOKEN_TO_BE_REPLACED