Randall Bal and Elizabeth Simmonds of the USA and Great Britain respectively were awarded the top honors as the best male and female swimmer of the inaugural SA International Invitational Swimming Meet at Newton Park Swimming Pool in Port Elizabeth at the weekend.

Bal saved his best for the 50m backstroke where he left World Record Holder Liam Tancock and Gerhard Zandberg in his wake after cruising in the heats. His 24.83sec winning time was worth 907 points on the FINA Ranking list and was good enough to earn him the US$10 000 prize money.

Simmonds’ 2:09.28 in the 200m backstroke on day one earned her 899 points to take the honors as best female swimmer of the Meet.
In the absence of Cameron van der Burgh who feared an injury and withdrew from the 100m breaststroke, it was left to Brazil’s Joao Gomes ÔÇô winner of the 50m breaststroke on day one ÔÇô to make it a double in the shorter breaststroke races. Gomes touched the wall in 1:02.04 ahead of Neil Versfeld (1:02.09) and Raphael Rodrigues (BRA) who finished with a time of 1:02.92.

Zimbabwe’s Kirsty Coventry gave notice that she was back after a 12 month sabbatical with four gold medals.

Coventry was too good in the 200m freestyle and Individual Medley races on day one of the two-day competition. On day two Coventry was rampant in the ladies 400m Individual Medley with a three second win over Spain’s 3-time FINA World Short Course gold medalilst, Mireia Belmonte. Kathryn Meaklim had a good swim and pushed all the way for the silver, but was passed by the Spaniard in the final 50m.

The women’s 50m breaststroke was an entirely foreign-affair, as Tatiane Sakami (BRA) equalled her time from the heats (32.99) to edge Lowri Tynan (GBR) 33.04 seconds, and Conchi Badillo of Brazil claiming the bronze 33.53sec.

Ross Davenport (GBR) was too strong for Germany’s Benjamin Starke in the 200m freestyle. Chad Le Clos rounding off the podium.
Le Clos was in action again in the 100m butterfly, and again succumbed to Starke, but this time the colour of the medal was silver. Neil Watson finishing third.

George Bovell of Trinidad and Tobago was too strong for Gideon Louw and Grant Turner in the 50m freestyle. Bovell was clocked at 22.39sec to the 22.86sec of Louw. Turner finishing in 23.12. 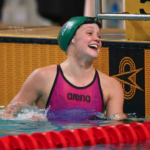 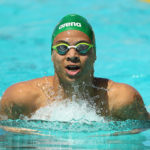 Houlie in the deep end Down Under

Rousseau on a roll

Tokyo looms, again, We don’t know for sure in what shape of form the Olympics and Paralympics will take place in July to September and if anything 2020 taught us to take nothing for granted. What we do know is that if Tokyo 2020 +1 does go ahead, it will do so against a new-found back drop where simply taking… END_OF_DOCUMENT_TOKEN_TO_BE_REPLACED