Four of South Africa’s best made it through Sunday after seven rounds to the 21 shots to win the finals of the calendar’s annual blue ribbon event and while there are no upsets at this level, odds were the five times men’s and women’s titleholders would triumph.

It was not to be. 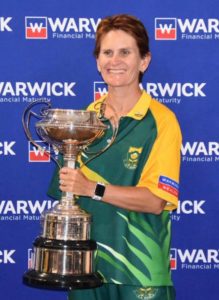 Said Bowls SA president Rob Forbes: ‘A scintillating weekend at a great tournament. Bowls of the highest standard throughout all three championships and a barn-storming win from the champions. Great organisation and administration from Wingate CC – South African bowls at its best and just what was hoped for before we leave for the Commonwealth Games.’

It was both winners’ first Masters gold medal; for Baker, the sole unbeaten player in seven qualifying matches and bronze medallist last year, it was a seventh silver medal; he is off to Australia in April for the Games. Classy Radloff, back from injury, showed superb touch against a truly master player.

Pictures of Radloff and Davis courtesy of Trevor Davis

Tokyo looms, again, We don’t know for sure in what shape of form the Olympics and Paralympics will take place in July to September and if anything 2020 taught us to take nothing for granted. What we do know is that if Tokyo 2020 +1 does go ahead, it will do so against a new-found back drop where simply taking… END_OF_DOCUMENT_TOKEN_TO_BE_REPLACED