Said coach Julie Adamson: “Training in Arizona was quite an experience.┬áWe trained at Desert Devils under head coach Wesley Jones (a South African expat who moved there with his family in 1990 when he was 11).┬áThe facility was great but the biggest benefit was that Jennifer got to train with girls doing similar skills to her.

“They also train at a very fast pace and Jennifer took a week or so to get into the swing of things. I learnt quite a lot on basic mechanics for certain skills and got a whole lot of new conditioning (strength and stretching) expertise that has allowed me to fine-tune my current training programme.

Since her return Durban based Khwela picked up a slight injury but it wasn’t too much to worry about. “She hyper-extended her knee so she was on light training and rehab for a week or so.”

“Wesley spoke to our gymnasts and said to them that they are relying on the coach to put in maximum effort while they coast along without working too hard and he told them that if they want to be world class they have to start pushing themselves more to get to their goals.

Khwela will be one of South Africa’s medal hopes at the Commonwealth Games in New Delhi, India later this year.

“The girls were a bit stunned as they thought that just being in America would make them better (much like an overweight person signing up for gym membership but not actually going to the gym!),” said Adamson. “Wesley wouldn’t let them progress until they improved basic techniques so this was really good as they now see that the effort needs to come from them.” 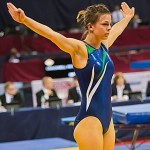 Ace gymnast Bianca hoping to bounce back after injury

By GARY LEMKE in Tokyo On the third day of staying in the Paralympic village bubble “it” finally dawned on me. “It” wasn’t the sheer visual aspect of the 4 000-plus Paralympians with disabilities all in the same environment of towering 17-storey apartments and surrounded by a 4km perimeter fence. Admittedly, that is the initial and most common conclusion of… END_OF_DOCUMENT_TOKEN_TO_BE_REPLACED