South African Jordy Smith has finished equal ninth in the Quiksilver Pro Gold Coast presented by BOQ on a day of major upsets at the first event on the 2015 Samsung Galaxy Championship Tour being run at Snapper Rocks in Queensland, Australia.
After 11 days of tiny waves, the contest resumed yesterday and the quarter-finalists were finally decided on Thursday, the penultimate day of the extended 13-day waiting period.
Competing in inconsistent but well shaped one metre waves that got better as the day progressed, Smith used his trademark powerful rail turns and progressive fins-free manoeuvres to defeat dangerous rookie Matt Banting (Australia) in Round Three.
However, he could not match the high flying repertoire of Brazilian teenager Felipe Toledo in Round Four, placing second in the three-man encounter. Smith was eliminated in the last heat of the day by Gold Coast stalwart Bede Durbidge (Australi) who found the best wave of their 30 minute, man-on-man Round 5 heat and posted a near perfect 9.50 points out of a possible 10 to clinch victory and advance to the quarters.
The day’s action produced a slew of upsets with reigning WSL world champion and defending event champ Gabriel Medina (Brazil), 11-time world champ Kelly Slater (US), 2014 rankings runner-up John John Florence (Hawaii) and 2012 world champ and local star Joel Parkinson (Australia) all being eliminated from competition in Round Three at the hands of lower-seeded opponents.
Three-time world champion Mick Fanning (Aus) looked strong throughout the day, first facing Dusty Payne (Hawaii) in Round Three where he used his patented carves to claim a nine-point ride and the top spot. Next he won his stacked Round Four heat against Brazil’s Adriano de Souz and Durbidge for a place in the quarter-finals.
Bianca Buitendag, the only South African amongst the world’s top 18 on the Samsung Galaxy WSL Women’s Championship Tour, was eliminated in Round Two of the Roxy Pro last weekend, finishing in equal 13th place overall.

Picture of Smith, courtesy of WSL/Swilly 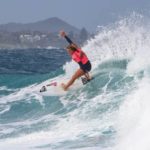 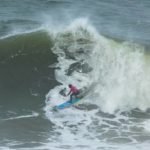 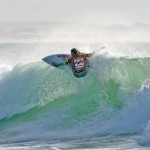 Girls steal the show at second day of SA Juniors

Tokyo looms, again, We don’t know for sure in what shape of form the Olympics and Paralympics will take place in July to September and if anything 2020 taught us to take nothing for granted. What we do know is that if Tokyo 2020 +1 does go ahead, it will do so against a new-found back drop where simply taking… END_OF_DOCUMENT_TOKEN_TO_BE_REPLACED