South Africa has returned from the Junior African Fencing Championships in Ghana having more than held its own against the traditional North African powerhouses.

The U20 women’s epee team won silver at the event, and recorded a number of individual wins in the pool stages of the competition.

Anchored by 19-year-old Phakama Yantolo, who hails from Khayelitsha in the Western Cape, the women’s epee team beat Tunisia in the semi-final before going down to Egypt in the finals. The SA team also comprised Phakama’s identical twin, Phumza, Anokha van Manen from Limpopo and reserve Paola Signorile from the Eastern Cape.

The second-placed finish moves the women’s epee team to 24th place in the U20 world rankings. Team events, where three fencers compete against each member of the opposing team over nine individual bouts in the senior age category is the primary qualification route for Olympic Games.

The team result was underscored by strong performances in the individual event, with Phumza Yantolo emerging top of the leaderboard after the pool stages and narrowly missing out on a bronze medal.

‘It was important for us to test ourselves against the best in Africa,’ Phumza said. ‘We have been working hard on a new style of fencing and it was rewarding to achieve those results and to bring back the medal.’

North Africa is an established force in international fencing, boasting two current fencers who have medalled at the Olympics and a number of fencers and teams in contention for qualification for the 2020 Olympic Games.

And with many of the top international fencers in their 30s there is ample time for the South African junior women epeeists to build towards senior gold.

‘We have a number of exceptional women epeeists in the 18-20 age range with some exciting talent coming through in the younger categories,’ explained Patrick Collings, who heads SA Fencing’s team managers and coaches commission. ‘We have a very strong core of fencers to support our long-term Olympic ambitions of medalling in women’s team epee.’ 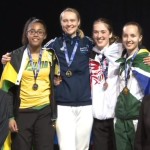 Adele puts back in

Tokyo looms, again, We don’t know for sure in what shape of form the Olympics and Paralympics will take place in July to September and if anything 2020 taught us to take nothing for granted. What we do know is that if Tokyo 2020 +1 does go ahead, it will do so against a new-found back drop where simply taking… END_OF_DOCUMENT_TOKEN_TO_BE_REPLACED