A calm Friday morning soon turned into a blustery day as Seal Point – the venue for the Billabong Junior Series Final pres. by BOS – felt the brunt of a passing cold front and was hit with rain and wind during the early morning.

Although the rain did not last long and the surfing continued unabated in the good point-break conditions.

The surfing kicked off with the U16 boys, and stand-outs included Josh Daniel and Brett Taylor as well as Manoa Robb and Nathan Perris, with Robb the highest scorer of this round.

The U14 boys were next in, and there was some great surfing in this competitive division, with young Leo Faclier the stand-out performer with an excellent heat total of 13.17 (out of a possible 20 points). Other surfers excelling in this division were Luke van Wyk, Connor Slijpen and Nate Colby.

In the U12 girls semi-finals, Anastasia Venter and Meka Loots, along with Sarah Scott and Gabi Herbst, all surfed excellently to advance through to the finals in their division, while in the U14 girls, it was Aimee du Preez and Kaylee Shaw-Nell who advanced to their respective finals, along with Adriel Wolmarans and Olivia Winter.

By the time the WSL Africa junior men’s event took to the water, the surf had improved considerably, there were several great performances by the best 18-and-under surfers in the country.

York van Jaarsveldt put on an excellent opening heat performance, winning his heat and advancing along with Karl Steen. Both surfers were on form and surfed with style and maturity. 

Aya Gericke advanced along with Brad Scott in the second heat, while Bryce du Preez and Thomas Lindhorst emerged successfully from their encounter, eliminating Daniel Orpen and James Ribbink in the process.

The final heat of round one was won by Luke Thompson, whose surfing showed a maturity beyond his years. Along with rising young East London star Daniel Emslie, the pair eliminated Samuel Loppnow and Robb from the event.

The opening heat of the WSL Junior women’s JQS 1,000 rated event saw Ceara Knight beat runaway rankings leader and event favourite Kai Woolf with fast and dynamic surfing as both girls advanced into the next round.

‘It was so much fun out there despite the wind,’ said Knight after her heat.

‘There were actually some really good waves to be had. I just had to make sure that I surfed them in such a way that I didn’t get blown over the back of them.’

Kayla Nogueira also won her opening encounter, taking heat runner-up Kirsty McGillivray along with her to the next round.

Zoe Steyn put on a polished performance on her backhand to win her heat, and advanced along with Tayla de Coning, while Du Preez and Olivia Izzard survived their encounter and will be back in the water on Saturday.

The forecast for Saturday looks promising, and the event organisers set their sights on an early start. A slight lift in the swell, less wind and an afternoon high-tide could all come together for an amazing day of surfing.

PHOTO: Steen in action on Friday, by Ian Thurtell 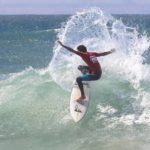 February, Hulett are champions in PE Masencamp the master as he downs top seed 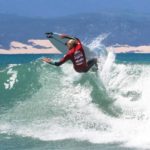