South Africa’s Junior Kayaking squad wrapped up a successful┬áweekend at the 13th Junior Sprint World Championships in Russia on Sunday, with six boats racing in the B-finals.

With the world’s brightest future sprint stars taking part, the South Africans now know where they stand in world terms, and with some of the team likely to be back next year, they also know what is required to reach the A-Finals.┬á

The heats for the 1000m and 500m distances took place on Friday in hot┬áconditions amidst an air of tension. Four boats qualified for the 1000m┬ásemi-finals on Saturday morning, with the K2 pairing of Esti van Tonder and Kerry Segal the top performers in the 1000m Finals that afternoon. The KZN/Gauteng pair qualified for the B-Finals where they finished in fifth place, effectively ranking them 14th in the world.┬á

Also on Saturday afternoon, Stu MacLaren and Martin van den Bergh raced to sixth place in their K2 1000m B-Final, while Chrisjan Coetzee┬╣s seventh place in his semi-final saw him through to the K1 1000m C-Final, where he excelled to take the victory. Considering this is his first international competition, it was a great achievement for the youngster.┬á

The 500m events all took place on Sunday, with morning aemi-finals seeing four of the South African boats progress to the afternoon’s B-finals. Van Tonder and Segal again achieved the best result by placing seventh in their K2 race, while Coetzee improved on his 1000m result by finishing eight in the boy’s K1 500m B-Final. Coetzee’s performance may well have qualified South Africa for the 2010 Youth Olympics in the African slot.┬á

The other team boat to progress through to the 500m B-finals was the┬ácombination of Frans Smit and Gregor Martin, where the pair had to settle for ninth spot, while the girls K4 finished off the weekend by also claiming ninth in their 500m B-final.┬á

Melanie van Niekerk had a difficult weekend as she failed to progress to the finals of her K1 1000m and K1 500m events, but considering the fact that she still has two years at this level, there is plenty of time for improvement. The boys K4 was knocked out after Friday’s 1000m heat, and also failed to make the finals of the 500m.┬á

The team returns to South Africa having competed in the toughest regatta of their lives, knowing that they held their own for the large part. The experience will be vital for their progression to the senior ranks, and┬áalthough there were no paddlers in the A-finals, with the right direction┬áfrom coach Attila Adrovicz, there is much to be excited about for the┬áfuture. 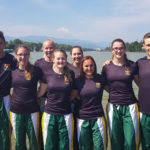 Junior, U23 paddlers look to perform in Plovdiv

No more medals as SA paddlers hit by rudder problems

Tokyo looms, again, We don’t know for sure in what shape of form the Olympics and Paralympics will take place in July to September and if anything 2020 taught us to take nothing for granted. What we do know is that if Tokyo 2020 +1 does go ahead, it will do so against a new-found back drop where simply taking… END_OF_DOCUMENT_TOKEN_TO_BE_REPLACED