Comrades Marathon runner-up Charné Bosman has decided to run only one marathon as part of her preparation leading up to the Two Oceans 56km ultra-marathon.
The Nedbank Club runner will compete in Sunday’s Johnson Crane Marathon in Benoni.
‘My aim is to run a time of about 2 hours 48 minutes. The plan is to start out at about four minutes per kilometre and then try to finish strongly,’ said Bosman who is also sponsored by the HPC.
Bosman’s training seems to be on track as she finished third (37min 15sec) in the George Claassen 10km race during the past weekend. ‘At the moment I focus mainly on speed work and on getting stronger by running short steep climbs. At this stage I also do a lot of long slow distance runs. I have been working with Candice Attree (biokineticist) in the gym and I can honestly say I have benefited from it.’
Lindsey Parry (head coach at the HPC) explained the reason he wants Bosman to run only one marathon is that she is a high profile athlete. ‘Because everybody recognises her, an athlete like Charne can easily be caught up in all the excitement and hype of a race and end up racing harder than she should.
‘I have no doubt that she’s capable of running a time faster than 2:48, but I don’t want her to do so. A 2:48 race is hard but it won’t “kill her”. It’s important that it shouldn’t be necessary for to take time off from training after having run a marathon. I am planning for her to do quite a few 42-45 kilometres runs during training sessions.’
Perry said he is quite excited about the way Bosman’s training has been going.  ‘Since last year’s Comrades everything has gone according to plan. She has not missed a day’s training and, more importantly, she is injury free.’

ASA employee goes back to work 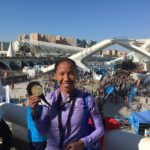