Despite their 6-0 U20 World Cup qualifier thrashing at the hands of Nigeria at the weekend, Basetsana coach Maud Khumalo has urged her charges to keep their heads up.

Khumalo was speaking to her team after the youthful side arrived back in Johannesburg after bowing out of the world showpiece qualifiers at the hands of their eternal rivals, Nigeria at the Samuel Ogbemudia Stadium in Benin City.

The defeat means that Basetsana are yet to feature in a FIFA Women’s U20 World Cup, Khumalo encouraged her youngsters to remain focused on their football careers as they have age on their side with a majority of the squad recently completing their matric while having to focus on the qualifiers.

‘You still have age on your side and have done well to reach this stage of the qualifiers. The result did not go our way but that does not mean you are failures. You fought hard like true champions and should you keep that spirit up, you have a good future in football,’ said Khumalo.

‘I would like to thank our football association for trusting me with such a big task of coaching a national team. It is something I do not take lightly. The experience and lessons learnt will certainly go a long way in contributing to the growth of women’s football in our country.’ 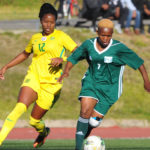 Vital away win for Banyana Banyana in Lesotho

Tokyo looms, again, We don’t know for sure in what shape of form the Olympics and Paralympics will take place in July to September and if anything 2020 taught us to take nothing for granted. What we do know is that if Tokyo 2020 +1 does go ahead, it will do so against a new-found back drop where simply taking… END_OF_DOCUMENT_TOKEN_TO_BE_REPLACED