South African Raven Klaasen’s love affair with the Australian Open continued in Melbourne on Monday as he and America’s Rajeev Ram beat the formidable Bryan twins, Bob and Mike, in the third round.
The SA/India duo beat the Americans 3-6 6-3 6-4 in a thrilling match that served up an hour and 43 minutes of entertainment.
Thirteenth seeded Klaasen and Ram fired down 13 aces between them to just four by the twins and had no double faults against their name, compared to two by the Bryans.
They also dominated all areas of service with an 80% of first services finding the mark and winning 72% of points available on first service.
They also topped the second service points won with 59% success.
Although they made more unforced errors (10) than the Bryans (7), they were streets above the tournament’s third-seeded combination in terms of winners, 55 to 34.
It was just two years ago that Klaasen, then partnered by American Eric Butorac, also beat the twins, who are six-time Aussie Open doubles champs. On that occasion it was also the third round.
Klaasen and Butorac went on to reach the final where they lost to Sweden’s Robert Lindstedt and Polish partner Lukasz Kubot in straight sets 3-6 3-6.
He and Ram will now move on to the quarter-finals where they’ll play seventh seeded Jamie Murray of Britain and Bruno Soares of Brazil. The last-mentioned beat Lindstedt and Dominic Inglot of Britain 6-3 6-4.
‘We played a very solid match today. It was a great atmosphere on the Hisense Arena,’ said Klaasen. ‘We really enjoyed the match, and even more so because we were able to pull out the win. There’s a lot of tennis left in this tournament and we want to keep improving.’
Travelling coach and former Davis Cup doubles ace Jeff Coetzee told Road to Rio 2016: ‘So happy Raven and Rajeev won, especially vs the Bryans. Now they just need to keep going with the the momentum. The boys fought well after being set down, stuck to the game plan and the execution on big points paid off.’
Coetzee is currently in the coaching game now and looking after the Colombian duo of Juan Sebastian Cabal and Robert Farah who lost in the third round. Prior to that he was working for the Schüttler/Waske Tennis Academy in Frankfurt, Germany.
‘I like the match-up vs Soares/Murray and feel if they served like they did today and Rajeev returns as well as he has, it gives Raven the freedom to be more relaxed on crucial points.’

Chani out in Paris 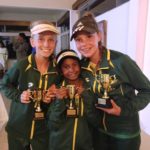 SA’s U12 girls book their spot for African Juniors

Tokyo looms, again, We don’t know for sure in what shape of form the Olympics and Paralympics will take place in July to September and if anything 2020 taught us to take nothing for granted. What we do know is that if Tokyo 2020 +1 does go ahead, it will do so against a new-found back drop where simply taking… END_OF_DOCUMENT_TOKEN_TO_BE_REPLACED