Runners-up and tied for second were Lara Bechet, formerly of Western Province but now living in Gauteng, and Chris van der Merwe.

Bechet was riding Something Special and 16-year-old youngster Van der Merwe, who hails from the Eastern Cape, was on Little Big Time.

The competition format was a final where the top four qualifiers compete in the event, each riding all four horses. 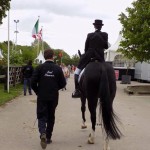