In an absorbing final in Bloemfontein on Monday, UFS Kovsies stunned defending champions UP Tuks 63-59, to win the 2018 Varsity Netball tournament.

The match got off to an exhilarating start with Kovsies’ Tanya von Berg taking the first centre pass which was converted to a goal by Lefébre Rademan. This was followed by another two goals by the Kovsies before Tuks got on the board following an interception by their captain, Tshina Mdau.

Tuks worked hard to capitalise on the Kovsies’ mistakes and the shooters converted the team’s efforts. However, the fired-up Kovsies defence followed with multiple interceptions to help end the first quarter 19-15 ahead.

Tuks immediately placed Kovsies under pressure in the second quarter, leading to a three-second held ball call, which was converted by Ine-Mari Venter and soon the score was 19-19. By the end of the first half, Kovsies had edged to a 30-28 advantage.

The start of the second half saw some changes on both sides as Rieze Straeuli came on at wing attack, moving Khanyisa Chawane to centre for the Kovsies. For the Tuks side, Venter was moved to goal attack making place for Venetia Grobler at goal shooter.

Kovsies drew first blood, but Tuks came back strongly, taking the lead for the first time in the game with two goals. Five minutes into the quarter, the first power play was called in which both sides scored a double pointer each. With an interception from Khomotso Mamburu, Kovsies managed to level the scores. When the third quarter ended, Kovsies had only a one-goal lead at 42-41.

In the last quarter, Tuks quietened the home crowd as they flew into a five-goal lead but the Kovsies were not ready to throw in the towel and immediately struck back and levelled the scores at 50-all.

At this point, with seven minutes left, the second power play was called and with an enthusiastic home crowd behind them, Kovsies scored four double pointers to the Tuks’ two, taking the scores to 58-54. 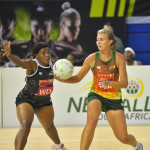 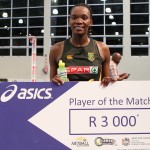 Proteas down the ‘She Cranes’ to stay unbeaten in Challenge 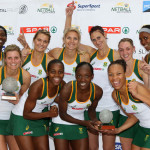