Invited by the Comrades Marathon Association (CMA) to run the Xiamen Marathon, Laxton ended sixth in a time of 2hr 46min 52sec.

Laxton, 31, is the daughter of national running legend Sonja, who is well on the way to recovery after a serious injuries when she was knocked down by a car while training late last year.

Laxton shared some of her thoughts with Road to Rio 2016.

“We (the ‘elite’ female runners) congregated at 7am in the lobby of the Xiamen International Seaside Hotel and each runner was allocated a Chinese volunteer, who waited on us like we were royalty. At 7:15 we walked to the inside warm-up area and at 7:40 the female athletes were ushered to the start-line.

“The pistol went and we started our race, my first time running in the international arena, flanked by women from around the world. I was energised by the crowd, the yelling of encouragement, the dedication of my fellow competitions and the excitement of the occasion. The initial pace was quick, but what was striking, from the very beginning, was the fact that this would be a time-trial, a rather lonely run for me, as the female athletes were few and spread out, and the elite men and rest of the field started 15minutes later.

“These thoughts come to mind when I think back on my 41.195km of running ÔÇô cheering crowds, cameras everywhere, organised drinks points,┬á wide roads with no cars ÔÇô a flat course that gives no relief to the tired runner, no familiar faces, no cars, intense concentration, solitude!

“I had no idea of my position and only when I crossed the finishing line did a bubbly volunteer place a Number 6 tag around my neckÔÇª it was over….my international debut was complete.

But from a South African perspective there was still plenty that Laxton missed, despite all the international excitement.

“I missed South Africa! I missed the familiar red bunting and orange cones along the route. I missed running in narrow streets, flanked by men and familiar club colours. I missed checking for traffic as I crossed intersections and the marshals that wave one over a traffic light. In particular, I missed the African sunrise, which we are so privileged to experience during our early starting times.

“And I longed for the familiar voices of my parents, who have supported and encouraged me as long as I can rememberÔÇª””

Looking forward though she’s got the travel and competition bug. “Xiamen brought a new flavour to my running. It introduced me to the international arena, and I was able to stand (just briefly) alongside some of the specialists in marathon running.

“Also, what an honour to enjoy another person’s city, where traffic is stopped and the red carpet is rolled (metaphorically) out on 42km of tar, alongside the most beautiful sights and monuments of a country. I return to South Africa with a thirst to do this again, and am so grateful for my ability to run…the most effective way of absorbing in a new city!” 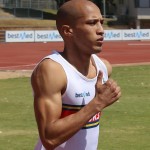 Commonwealth champ Fredericks not too fussed about only being fourth fastest