Perhaps it’s the nature of the beast but most casual sports observers will have a look at the final medals table and form an opinion on whether or not Team SA’s Olympics was a success or not. It’s understandable, but also short-sighted and a reaction tailor made for the world of social media.

For what it’s worth, I’m predicting that South Africa will land somewhere between their medals total from London (six) and Rio (10). Considering that Caster Semenya, the 800m gold medallist in both those Olympics, will not be competing because of World Athletics’ ban on her, it wouldn’t be a regression on Rio.

Also, given that Wayde van Niekerk has never been the same athlete who broke the world record in the 400m in 2016 after suffering a crippling knee injury in 2017, and Richard Murray, who was fourth in the triathlon in Rio, is recovering from a heart procedure and won’t be 100 percent fit for Tokyo, South Africa has seen damage done to some of its big guns.

However, we’ll leave the actual medal predictions for closer to the time. For now though I’d like to highlight some of the things to celebrate about this Team SA squad that will be in Tokyo.

SASCOC, the country’s Olympic controlling body, has come in for a lot of criticism over the years for a variety of issues, including that of not funding athletes to go to Tokyo. In past Olympics’ they had stricter qualifying selection criteria. For these Games, and taking the hardships and heartaches suffered from the Covid-19 pandemic, they have relaxed selection. Now, everyone who qualified is being sent to the Games. It means the largest-ever squad will go to the Olympics.

This means that they’ve fitted a lot more in line with Baron Pierre de Coubertin’s modern Olympics dream of, ‘it’s not the winning that’s important, it’s the competing,’ than the proverb, ‘second is first loser’.

Therefore we’ll see sports that you might not even know were Olympic disciplines – surfing, skateboarding and sport climbing, for instance, representing Team SA. There are admittedly a number of no-hopers, the waterpolo squad for instance will be under the pump on this big stage, but they are going. And in that light SASCOC deserves credit for sending them. We could do with some good news given the Covid pandemic.

Often SASCOC has been given poor media out of naivety. For instance, I was disappointed that men’s hockey this year got an independent company to run a crowd-funding campaign. My disappointment wasn’t because they took that route, but the published reasons for doing so. The message was that SASCOC was not paying for men’s hockey to go to Tokyo and the players would need to pay for themselves. That narrative has been trotted out elsewhere too.

Basically, SASCOC delivers Team SA to a multi-sport Games. They are paying all travelling costs to Tokyo (return from South Africa), plus accommodation, full kit and all meals. What men’s hockey effectively were looking for was funding ‘to prepare for the Olympics’, which is very different to ’players are having to pay to go to Tokyo’.

SASCOC takes ownership of the squad prior to departure and its responsibilities straddle the Games until they are over. Individuals then go back to their federation. So, when looking for sponsorship, the quibble from individuals lies with their individual federation and not SASCOC as is often wrongly reported.

The good thing though is that local sponsorship – the kit is Mr Price Sport and Veldskoen included – has been sourced and the biggest squad is being delivered to Japan, despite the ongoing pandemic difficulties.

Already teams for athletics, cycling, golf, gymnastics, hockey (men and women), rowing, rugby sevens, sailing, skateboarding, sport climbing, swimming, surfing, triathlon and waterpolo (men and women) have been named, with more to be unveiled in the coming week or so.

Considering the size of the team and the diversity of sports going to Tokyo, plus the sourced sponsorships, surely that is worth celebrating as much as an Olympic medal, given the negativity around previous Olympic teams. For the first time too there is a sports psychologist going with the squad. These things all add up to tireless behind the scenes work that has been done by the people at SASCOC in getting this far. 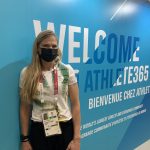 Looking beyond the medals