Adriaan Louw and Louis-Bresler Knipe of team Contego Elite took no prisoners during Stage Two of the Contego Wines2Whales MTB Race around Grabouw on Saturday.

According to Louw their strategy going into Stage Two was to make it known that they were here to race. ÔÇ£We felt really good today.┬á The course was perfect for mountain bike racing, the loads of single track just made it so much more enjoyable.┬áAlthough we’re a young team, Louis-Bresler and I complement each other extremely well.┬á Our plan for Sunday is to work together as hard as possible and hopefully we’ll cross the line first,ÔÇØ says Louw.

Karien van Jaarsveld and Cherise Taylor of team Ladies USN continued their winning streak completing the route in a time of 4:02:31.

ÔÇ£We are really blessed to have experienced this amazing route today,ÔÇØ says van Jaarsveld.┬á ÔÇ£The single track was just lovely.┬áStarting at a fast pace, Cherise and I pushed really hard.┬á We have a great partnership, which allows us to achieve a lot of synergies.┬áWe’re really enjoying every minute of this raceÔÇØ.

They crossed the finish time in an impressive time of 3:52.┬á Team Decorton came in second, while Team Fair Cape Mixed finished third.

The final stage is an 85km trek between Grabouw Country Club and Onrus Caravan Park near Hermanus. 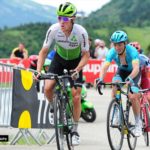