‘I had the plan that I was going to go out as hard as possible and get ahead,’ Malherbe said after his 1000m final in Plovdiv. ‘I managed to get ahead but at the 150m mark I hit a wall. The semi-final really took it out of me but I had to keep going. I could hear all the cheering from the side and so I knew I had to dig deep.’

It was a busy first outing at a World Championships for Malherbe who went into the event not quite knowing what to expect despite gaining some crucial racing experience in the build up to the event.

‘I paddled in a few regattas before the world championships that helped me because I needed that confidence of racing internationally. Doing well in those races gave me that belief that I can compete on this stage.

‘I knew that I could do well in South Africa but to compete over here is a whole different experience,’ he added.

Malherbe followed up his impressive 1000m showing with another B Final in 500 metres where he finished ninth on the final day of competition.

Donna Hutton was another paddler who impressed in only her second year in the U23 age category. Hutton notched up two B Finals as well where she finished eighth in the 200m K1 and followed that up with an impressive second in the 500m B Final.

There were a number of other B Finalists with Morgan Ziervogel, Caroline van der Linde and David Rodrigues finishing ninth in their U23 1000m K1, Junior 200m K1 and U23 200m K1 finals respectively.

In the only K2 boat entered, Keegan Kieser and Jackie van der Westhuyzen finished seventh in the junior girls 500m K2 B Final.

Jonathan Jooste missed out on a semi-final in the junior boys 200m K1 event when he finished eighth in his heat.

SA K4 crew in Germany are building for Rio 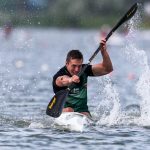