Athletics South Africa’s interim board and administration headed by SASCOC board member Ray Mali, will continue in their posts until all matters relating to the national federation’s suspended former board and management persons have been sorted out.

The decision for the current leadership to continue beyond the anticipated six-month period, was approved by the 17 provinces and six associate members, at the ASA council meeting held in Benoni, near Johannesburg┬á and has the blessing of world controlling body, the International Association of Athletics Federations (IAAF), and local sports controlling body, the SA Sports Confederation and Olympic Committee (SASCOC).

ÔÇ£During my trip with the SA team to the IAAF World Indoor Championships held in Doha, Qatar two weeks ago, I met with IAAF officials who indicated their concern that the interim board and interim administration would step down after the six-month period before all forms of business were completed,ÔÇØ said Mali.

ÔÇ£Based on this, the proposal was put to the ASA council that the interim board and administration continue until the process has run its course, and this was favourably received by our athletics members today. As a result, the ASA AGM including elections, scheduled for May 15, has been postponed.ÔÇØ

The provincial representatives who attended the ASA council meeting, also left for home with recommendations regarding amendments to the ASA constitution.

Also at the meeting┬á Terrence Magogodela has been appointed as finance manager on a fulltime basis, following a recent interview process. 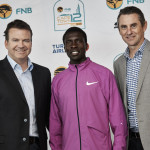 Africa’s fastest in Cape Town in search of world bests

Spot in final is a few strides too far for Oscar

Tokyo looms, again, We don’t know for sure in what shape of form the Olympics and Paralympics will take place in July to September and if anything 2020 taught us to take nothing for granted. What we do know is that if Tokyo 2020 +1 does go ahead, it will do so against a new-found back drop where simply taking… END_OF_DOCUMENT_TOKEN_TO_BE_REPLACED