Luvo Manyonga was in a class of his own as he soared to an IAAF Diamond League meeting long jump record of 8.54m in Birmingham, England on Saturday, writes MARK ETHERIDGE.

South Africa’s world and Commonwealth Games champion opened with a solid 8.42 at the Alexander Stadium.

That was followed by two no-jumps before he unleashed the winner. He closed with an 8.47 and left all opposition trailing in his wake.

Back on the track, it was Dominique Scott-Efurd in the women’s 3,000m.

The United States-based Capetonian was handily slotted into eighth as the first kilometre was gobbled up in just under 2:40.

Kenya’s Agnes Tirop went on to win in 8min 32.21sec, leading a Kenyan sweep of the podium.

Photo: Manyonga soars to glory in Birmingham on Saturday, by Ben Stansall/AFP/Getty Images 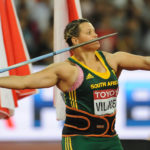 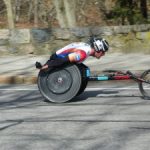