Led by a bloodied Hank McGregor, South Africa grabbed another two medals on the final day of the ICF Canoe Marathon World Championships at Camps Drift in Pietermaritzburg to end up second overall on the medal table.

Saturday’s K1 men’s winner, sporting a large cut above his left eye from a clash of paddles, and partner Jasper Mocké claimed the gold in the final event of the championships to give the 2015 World Paddler of the Year his 10th World Championship title and ensured that he completed the K1 and K2 double for the third time.

Despite his experience at winning world titles, McGregor seemed a bit bemused by the fuss.

‘It hasn’t quite sunk in yet, to be honest,’ said the Durban star. ‘I was never going for anything like this and to even win one world title is something special, but to win ten is incredible.

‘To win it here in front of the home fans with Jasper was special, and it rounded off a fantastic week for me with my family here.

‘The South African public always knew that we were good, but to watch this happen first-hand will hopefully encourage people to get into paddling.

‘I think that somewhere along the line someone has been inspired to pick up a pair of paddles and give it a go. It’s really hard racing with the K2’s travelling at 22km/h in shallow water, but you can’t get flustered and have to just roll with the punches.’

McGregor and Mocké produced a potent finish sprint to claim their victory, but behind them in a bizarre photo-finish for second, the Hungarian pair of Adrián Boros and László Solti celebrated their second position before crossing the line.

The top three were almost identical to the 2016 finish order when McGregor and Mocké beat Boros and Solti with Birkett and his then-partner Louis Hattingh third. This win is also the third time the McGregor/Mocke and Boros/Solti combinations have shared the top two positions, with the Hungarians winning in 2015 and grabbing silver last year.

There was nothing easy about the final event of the championships with a massive group of boats jostling in a testosterone-laden bunch for the first lap until things broke apart, and there were finally seven boats left halfway through the second lap as the paddlers headed for the first portage.

That became five when the Hungarians were dropped just before the first portage, and their hopes of a medal looked to be fading away as they slipped to more than 30 seconds behind the lead group. But, in an incredible show of power paddling, the Hungarian duo hauled themselves back into contention on lap six.

From there it was a tight tactical battle until the final portage where, as with the K1 race on Saturday, McGregor and Birkett led the race to the water and then held the two lead positions through the top turn and into the final sprint for glory.

As with Saturday, McGregor, this time with Mocké providing added power from the back of the boat, was able to keep his boat in front to claim his 10th World Championship gold medal.

But for Birkett there was no repeat of Saturday, as he and the young Van der Westhuyzen were no match for the potent power of the Boros and Solti, and the Hungarian pair always looked to be the silver medallists once the sprint started.

Luis Pérez and Miguel Llorens from Spain were fourth, with Frenchmen Stéphane Boulanger and Jérémy Candy fifth and the final boat from the lead group, the Norwegian brothers Eivind and Jon Vold drifting over the line in sixth.

Earlier the young Hungarian crew of Vanda Kiszli and Sãra Anna Mihalik mixed the perfect balance of power, guile, tactics and patience to lead a Hungarian one-two to almost match McGregor when they both collected their second medals at the championships.

Mihalik, who won the U23 women’s K1 title on the opening day, and Kisli who on Saturday finished second in the women’s K1 race, looked to be out-powered in the early exchanges with Britain’s K1 women’s winner Lani Belcher and her partner Hayleigh-Jayne Mason.

The second Hungarian crew of Renáta Csay and Alexandra Bara, aiming to win their fourth women’s K2 title in a row, always looked to be scratching in the lead group and the smart money was on the British crew leading home a Hungarian two-three. The Danish and South African crews, who made up the lead group until the final portage, were always struggling and there seemed little chance they would muscle in on the medals.

However, on the final portage Kiszli and Mihalik showed that maybe their slowish portages throughout were nothing more than a ploy, and for the first time they put in ahead of their British rivals and had the advantage for the final 1 000m paddle to the finish.

The move proved decisive, as nobody from the front group was able to re-connect, and Kiszli and Mihalik were able to get home relatively easily with clear water behind them.

In the battle for the minor medals, Csay showed why she came into this championships with no less than 28 world championships to her name. The 2014, 2015 and 2016 championship winning crew came past Belcher and Mason fairly easily to claim the silver and relegate the Brits to third.

The Danish duo of Emilie Rosenkilde and Henriette Engel Hansen were fourth on the wave of the final medallists, with South African’s Hayley Arthur and Michelle Burn (pictured above) a distant fifth after they were left behind at the end of the final portage.

Hungary picked up their third medal in two races when Márton Kövér and Ádám Dóczé outsprinted the Spanish duo of Ramon Ferro and Oscar Graña to claim the men’s C2 gold.

A trio of boats broke early, but just when it looked like a fascinating three-way tussle, the second Spanish crew of Manuel Antonio Campos and José Manuel Sánchez fell out while putting in after a portage and, despite a quick empty and recovery, were never able to re-connect with the leaders and had to settle for third.

Up front there was little to choose between the two lead boats until the final sprint when the Hungarians unleashed an explosive kick that had the Spanish duo down paddles with 75m remaining.

Hartley back to Europe 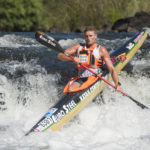 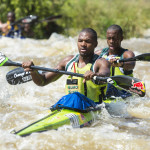 Banetse’s back for Dusi… and what does the doctor say?

Tokyo looms, again, We don’t know for sure in what shape of form the Olympics and Paralympics will take place in July to September and if anything 2020 taught us to take nothing for granted. What we do know is that if Tokyo 2020 +1 does go ahead, it will do so against a new-found back drop where simply taking… END_OF_DOCUMENT_TOKEN_TO_BE_REPLACED