Runner-up in the 800-metre final at the Yellow Pages national track and field championships in Durban, Mapaseka Makhanya kicks off her European season next weekend.

And by all accounts its going to be a case of “hanging in at Hengelo”, given the quality of the line-up assembled for the 1500m event for the annual Fanny Blankers-Koen Games in the Netherlands.

Twenty-six-year-old Makhanya is one of 14 entries in the women’s 1500m — and of these 11 have faster times than her personal best.

That time is 4min 08.18 but the fact that it also came in Europe (Heusden-Zolder in Belgium), last year, will be encouraging for the Soweto athlete.

It’s only her first 1500m of the season and its only understandable that Makhanya is feeling a tad nervous. “I’m a bit nervous already but also very motivated. It’s the best field I’ve ever been entered in for a European race so surely I’ll run a fast time. I’ve had a good South African season so I’m also hoping for a greater European season.”

Quickest in the field is Burundi’s Maryam Jamal with a 3:56.18 best to her name. Three of the field have dipped under the 4min barrier, the other two being Russia’s Natalya Yevdokimova (3:57.73) and Poland’s Lidia Chojecka (3:59.22).

The good thing is that Makhanya will take the quality field in her stride. “I’m not intimidated, just nervous and not knowing what to expect. I have my race plan though and I’m hoping to run a sub 4:10ÔÇª it would be lovely to qualify for World Championships in my first race.”

Those qualifying standards stand at 4:08.90 (B standard) and 4:05.90. Makhanya will leave for Europe next Friday, two days before the race.

Other South African set to compete in Hengelo are Lehann Fourie in the men’s 110m hurdles as well as Roelf Pienaar in the long jump. 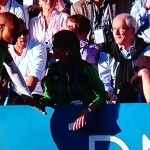 Viljoen’s silver is the best SA result in Norway

Tokyo looms, again, We don’t know for sure in what shape of form the Olympics and Paralympics will take place in July to September and if anything 2020 taught us to take nothing for granted. What we do know is that if Tokyo 2020 +1 does go ahead, it will do so against a new-found back drop where simply taking… END_OF_DOCUMENT_TOKEN_TO_BE_REPLACED