Our men and women have made good progress at the World Rowing Championships in Chungju, Korea, writes Mark Etheridge.

But the lightweight men’s fours that took gold at the London Olympics last year, had to go into the repechage round in their category if they are to make the final.

With Matthew Brittain missing for these championships and replaced by Michael Voerman, the combo of James Thompson, John Smith and Sizwe Ndlovu ended fifth in 6:09:50, with only the first two in the heat going through automatically.

Rowing in the third of three women’s pairs heats, our other Olympians, Lee-Ann Persse and Naydene Smith, ended second behind the United States.

Germany and Italy made up the field. The first combinations in each heat went directly to the semi-finals.

In the lightweight singles, Ursula Grobler won her heat to also go directly to the semi-final. Drawn in lane five she ended in 7min 58.4seconds, comfortably ahead of Belarussian Alena Kryvasheyenka (8:04.59).

There was also success for men’s pairs Shaun Keeling and Lawrence Brittain, who were second behind France. The SA duo clocked 6:51.95 behind the French pair of Germain Chardin and Dorian Mortelette (6:44.47).

Not going through on the direct route were Kirsten McCann and Kate Johnstone. They ended third in the lightweight women’s skulls in 7:14.39, behind the USA and Netherlands and now go through to the repechage.

Earlier this year McCann had won a gold medal at the World Student Games in Kazan, Russia. 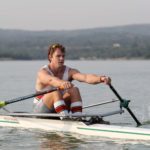 Title No13 for Ramon

Rowers up for challenge

Tokyo looms, again, We don’t know for sure in what shape of form the Olympics and Paralympics will take place in July to September and if anything 2020 taught us to take nothing for granted. What we do know is that if Tokyo 2020 +1 does go ahead, it will do so against a new-found back drop where simply taking… END_OF_DOCUMENT_TOKEN_TO_BE_REPLACED