Thank goodness for Khotso Mokoena, for the 2008 Olympic silver medallist singlehandedly rescued the first day of the South Africa National Championships. Of the 10 finals contested on the opening day, six victories were of a lower standard than last year’s winners.

And with Mokoena being the only medallist in Beijing, and the lack of medals at the last IAAF World Championships, the portents aren’t good for the 2009 World Champs in Berlin in August. However, it was left to Mokoena to produce a leap of 8.21m in the long jump that was the best of the day.

In Beijing last year, 8.24m had been good enough for Mokoena to take silver at the Olympics, and this jump at the Coetzenburg Stadium in Stellenbosch was his best for 2009.

Despite a strong wind, this can’t be used as a valid excuse for the general poor standard as last year the wind was even stronger in Stellenbosch.

Athletics South Africa has some real work to do if they are to help SASCOC in the stated ambition to get 12 medals in 2012. Disturbingly, the heats for the women’s 800 and 1500m were canceleld due to a lack of entries.

The public too, failed to respond; a mere 600 turned out to watch.

Apart from Mokoena, the only other ‘A’ standard for Berlin was that of Chris Harmse in the men’s hammer, with a throw of 74.78m.

Elsewhere, Janus Robberts won the shot put in 19.70m while former Olympic pole vaulter Okkert Britz, one of the few athletes to have gone over 6m in his career, won with 5.10m on his comeback to major competition. 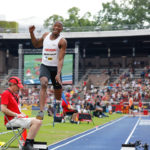 Silver for Steenkamp as SA athletes medal in Stockholm

By GARY LEMKE in Tokyo On the third day of staying in the Paralympic village bubble “it” finally dawned on me. “It” wasn’t the sheer visual aspect of the 4 000-plus Paralympians with disabilities all in the same environment of towering 17-storey apartments and surrounded by a 4km perimeter fence. Admittedly, that is the initial and most common conclusion of… END_OF_DOCUMENT_TOKEN_TO_BE_REPLACED