South African wheelchair tennis star  Kgothatso Montjane came agonisingly close to adding Wimbledon success to her list of achievements, but ultimately came up short on the hallowed grass at the All England Club in London.

Having finished runner-up in the women’s doubles final with her British partner Britain’s Lucy Shuker, Montjane took on world No1 Diede De Groot in the singles final.

The Dutch woman overcame the challenge to win her third Wimbledon title, 6-2, 6-2.

Her victory is also her 11th Grand Slam title and she holds the singles titles at all four Grand Slams simultaneously for the second time in her career.

‘It really feels amazing. Wheelchair tennis was for the first time on Court One and we made it very special today,’ De Groot said in her on-court interview.

The fifth-seeded Montjane reached the final after beating Japan’s Momoko Ohtani on Friday.

Montjane had the backing of the nation ahead of the Wimbledon decider and even President Cyril Ramaphosa wished her well on the eve of her first Grand Slam singles final.

‘That little bit of a break during Covid gave me that hunger back, you start to appreciate what you have and what you can do on a court like this, and I’m thankful and grateful I can be that player again,’ she said.

Anderson looks to get back on song in Shanghai 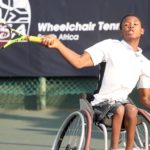