South African world No7 women’s wheelchair tennis ace Kgothatso Montjane has qualified for her fourth Australian Open and ninth Grand Slam tournament, joining the top names who will line-up for the four days of competition at the first major on the 2018 UNIQLO Wheelchair Tennis Tour.

The tournament will be held from 24-27 January at Melbourne Park, Australia.

The 31-year-old Montjane made history in 2013, becoming the first African player to compete in the invitation-only women’s draw of the Australian Open championships where she finished in the quarter-finals losing to Dutch-woman Aniek van Koot.

Montjane reached the quarter-final round again in both 2014 and 2016, losing to the current world No3 Sabine Ellerbrock from Germany and world No5 Van Koot from the Netherlands, respectively.

The Limpopo-born star who remains unbeaten by any other African player, and is considered a role model for able-bodied and disabled South Africans alike will be heading down-under booming with confidence following a successful year.

‘It’s been a tough journey, starting the season as world No10 and getting back to the top eight. The top eight ranking is the only one that can award you an opportunity to play tournaments like Grand Slam, so I’m grateful to have made it and this serves as motivation for me to keep improving so that I can play more grand slam tournaments,’ said Montjane.

The top seven ranked players on the UNIQLO Wheelchair Tennis Rankings at the ranking cut-off date, plus one wildcard, make up the eight players for the men’s and women’s events.

The top three ranked players at the ranking cut-off date, plus one wild card, make up the four players for the quad event. 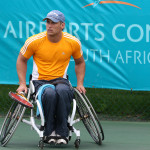 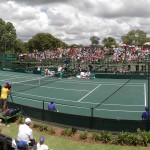 Kevin advances in US

By GARY LEMKE in Tokyo On the third day of staying in the Paralympic village bubble “it” finally dawned on me. “It” wasn’t the sheer visual aspect of the 4 000-plus Paralympians with disabilities all in the same environment of towering 17-storey apartments and surrounded by a 4km perimeter fence. Admittedly, that is the initial and most common conclusion of… END_OF_DOCUMENT_TOKEN_TO_BE_REPLACED