Both Montjane and Sithole lost their Bath Indoor final matches on Saturday after delivering a couple of gutsy performances to reach the women and quads title-deciders respectively in Great Britain.

Two-time Grand Slam champion Sithole reached the final round without dropping a set but his Dutch opponent Sam Schroder simply had too much class in the final. Schroder defeated second seed Sithole 6-3, 6-2 for his first International Tennis Federation 1 Series title.

Schroder ended Sithole’s hopes of leaving Bath with both the quad singles and doubles titles. On Friday’s penultimate day of play, Sithole partnered fellow South African Donald Ramphadi to beat Britain’s Antony Cotterill and Schroder 6-4, 6-7(3), 10-5 after a match tiebreak in the doubles final.

‘It was a good week for me, I never played so freely in a long time. Despite the loss, I really played well, and I’m happy with the progress I’m making in my game. I feel ready for the Doubles Masters,’ said Sithole.

In the women’s event, US Open semi-finalist Kgothatso Montjane had also reached the final round without dropping a set.

But Montjane lost to second seed Giulia Capocci, losing 6-3, 6-2 to the world No 6 who wrapped up the second ITF 1 Series title of her career.

Earlier in the week, the big-serving South African world No 5 had defeated former world No 6 Katharina Kruger of Germany in an impressive 6-1, 6-1 match and edged out Britain’s Lucy Shuker 6-1, 6-2 in just over an hour. 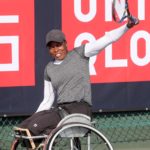