After being forced to end her 2009 season prematurely because of a broken collarbone, Ashleigh Moolman (Biogen Toyota) made a triumphant return to racing on Sunday when she won the Pick n Pay The Star Fast One 103-kilometre road cycling race south of Johannesburg.

The Stellenbosch-based rider confirmed that she’s not just a strong climber when she outsprinted a large lead pack in the popular race, that started at Nasrec and finished at Vanderbijlpark. Cherise Taylor (Nashua) and Carla Swart (MTN Energade) finished second and third respectively.

ÔÇ£It was great to win my first race back,ÔÇØ smiled Moolman. ÔÇ£I was a bit nervous as there was patchy rain, the roads were wet and there were a few potholes. But the pack rode very predictably and we got to the final turn safely.ÔÇØ

There were plenty of attacks in the race, but the absence of a strong wind or any significant ascents ensured that none of the attacks were successful and a 26-rider strong group remained to contest the final, gradual uphill dash for the finish line.

ÔÇ£Our Biogen Toyota team rode quite defensively because we only had four riders in the race, while MTN Energade had nine and Konica Minolta had eight,ÔÇØ explained Moolman. ÔÇ£Because it was quite a long sprint, it suited me perfectly. I sat on Lynette’s (Burger) wheel for a leadout and then timed my kick just right.ÔÇØ

Moolman’s team captain, Lynette Burger, the current South African road champion and also a noted sprinter, snapped a spoke within sight of the finish line, but she’d done enough to give Moolman the perfect springboard from which to launch her winning move.

Top team takes on the men 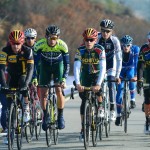 Medal hope Meintjies is a marked man in Spain

Tokyo looms, again, We don’t know for sure in what shape of form the Olympics and Paralympics will take place in July to September and if anything 2020 taught us to take nothing for granted. What we do know is that if Tokyo 2020 +1 does go ahead, it will do so against a new-found back drop where simply taking… END_OF_DOCUMENT_TOKEN_TO_BE_REPLACED