Yellow and orange are increasingly beginning to look like gold as the men’s and women’s leader jersey wearers consolidated their leads in Friday’s Absa Cape Epic Stage Five time-trial.

With just two more stages to go, the men’s and women’s Investec Songo Specialized teams have built up leads that they should defend comfortably, barring serious health or mechanical setbacks.

In a day of soaring temperatures, Czech Jaroslav Kulhavy and Howard Grotts of the USA tightened their hold on the men’s category yellow jersey as they added another three minutes to their overall cushion after their 39km time trial in Wellington.

On paper, the course – with an eye-watering 1,430m of vertical gain – looked to favour the cross-country specialists, more specifically the Cannondale Factory Racing team and Prologue winners, Centurion Vaude.

But Cannondale were the biggest losers of the day, a result of Thursday’s heroic efforts having caught up with them. German Manuel Fumic and Brazilian Henrique Avancini looked out of sorts for most of the route, the latter of whom took tremendous strain on the climbs.

‘We rode really hard and took some risks,’ said Avancini. ‘We gave it a shot but had no legs… it is what it is.’

Cannondale would eventually finish in fifth place, and with that result, drop one place to third below Austria’s Alban Lakata and the Czech Republic’s Kristian Hynek (Canyon Topeak) on the general classification.

Hynek said Lakata was making him ‘suffer’ for a large part of the time-trial but he eventually ‘found my legs’.

Although Canyon Topeak trail Kulhavy and Grotts by over seven minutes, Lakata believes he and Hynek are still in with a shot of winning the Epic: ‘We are still in it to win it and the next two stages suit us – more climbing, less flats.’

The day, however, belonged to Investec Songo Specialized. It was a flawless display in which Kulhavy and Grotts asserted their dominance by closing down Cannondale, who started three minutes ahead of them, within the first 20km.

‘It was amazing for us. We are really happy because we went at our own tempo and when we caught Cannondale we felt confident,’ said Kulhavy. ‘It felt like the hardest stage because of the elevation and steep climbs.’

In the Absa African Men’s special jersey race it was NAD MTB that posted the fastest time of the day, a solid result considering just a few days ago Matthew Beers was nursing a stomach bug.

For red Absa African special jersey wearers PYGA Euro Steel, it was a day of consolidation.

‘It was a really nice route and we started fast and tried to gain on the flats with me on the front and Julian [Jessop] in my slip,’ said Matthys Beukes. ‘We raced hard on flats and backed off on the climbs. That was our strategy.’ 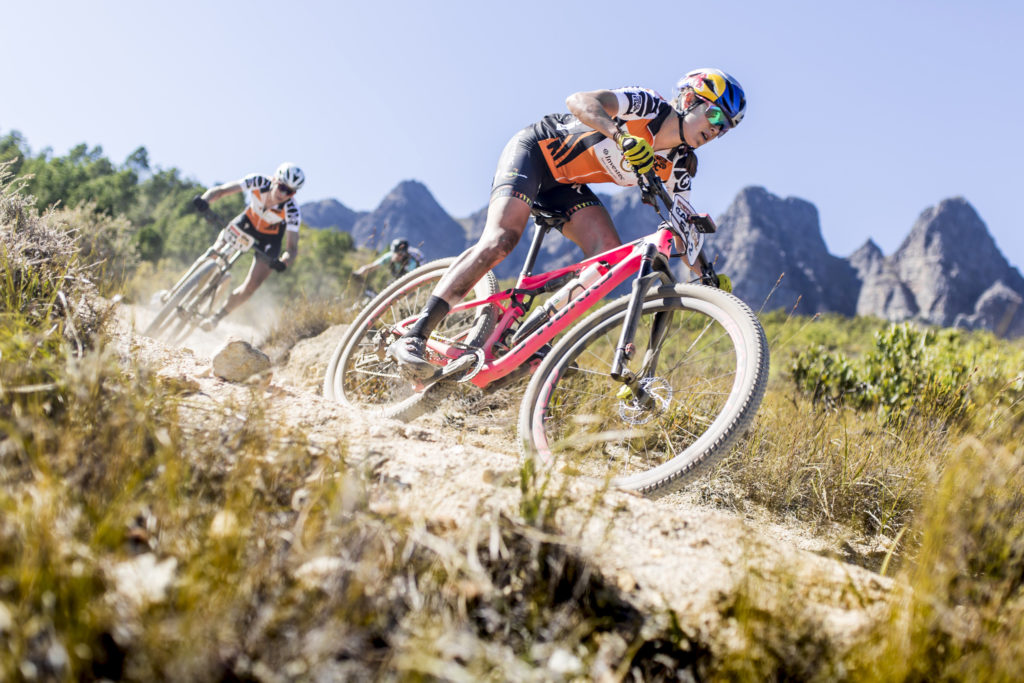 However, for the first time in the 2018 event, there was some doubt about the result in the women’s category for most of the stage. A resurgent Sabine Spitz and Robyn de Groot (Ascendis Health) led by 31 seconds through halfway and ended up just 12.5 seconds down at the end of the tough ride.

While the margin of victory was small, the Danish multiple world champion and her young American partner extended their overall lead by 2min 52sec over Annie Last and Mariske Strauss (Silverback-KMC), who are currently second overall and were third on the stage.

The gap from Investec Songo Specialized to Silverback KMC on general classification has now grown to just over 35 minutes.

Langvad, who has never been beaten in her three previous attempts at the Absa Cape Epic, said: ‘One of the proper challenges of this race is to concentrate all the time. Eight days is a long, long time and just the tiniest little mishap and everything can be gone in the blink of an eye.’

Courtney said their tactic was to ride a controlled stage: ‘The time-trial is a different challenge. Everything is tough in its own way out here at the Absa Cape Epic. I think today was hard after a long day yesterday, but we were able to ride in control and especially on the descents, where there were a lot of rocky and sandy corners, and we were able to pull back and avoid having any big mishaps.’

Despite nearly becoming the first team to get the better of the potent Investec Songo Specialized duo this week, German Spitz and local champion De Groot seemed surprised at the result.

‘I did not realise we had done so well,’ said the South African. ‘I felt better than I expected. After four days of over 100 kays, we expected it to be really tough but we rode nicely together and paced ourselves well.’

With the temperature climbing, the pro riders enjoyed the best of the weather, but Englishwoman Last said it was still uncomfortably hot.

‘On the first climb, you could feel the heat was already there. It was a 39km time-trial with 1,400 metres of climbing and [on Thursday] we did 113km with 1,800 metres, so there was a lot of climbing for a lot less distance.’

By GARY LEMKE in Tokyo On the third day of staying in the Paralympic village bubble “it” finally dawned on me. “It” wasn’t the sheer visual aspect of the 4 000-plus Paralympians with disabilities all in the same environment of towering 17-storey apartments and surrounded by a 4km perimeter fence. Admittedly, that is the initial and most common conclusion of… END_OF_DOCUMENT_TOKEN_TO_BE_REPLACED