Rena “Rusty” Kanokogi, known as the “Mother of Judo” partly for her role in bringing women’s judo to the Olympic Games, has died at the age of 74.

Associated Press reports that Rusty Kanokogi competed in judo against men in the 1950s and helped create the first Women’s World Judo Championships, which were held in 1980 in New York City.

“Rusty was the Gloria Steinem of judo, and women’s judo would not be where it is today without her relentless efforts,” Corinne Shigemoto, the US team’s coach at the 1996 Olympics, said in a USA Judo statement.

Kanokogi coached the US women’s judo team at the Olympics in Seoul, South Korea in 1988 ÔÇö the year the sport was added to the games. She worked as a judo commentator for NBC during the network’s coverage of the 2004 Olympics in Athens, Greece.

Jean Kanokogi said her mother worked hard to provide opportunities for women to compete in judo after she was stripped of a gold medal she won at the 1959 New York State YMCA Judo Championships. Women weren’t allowed to compete.

Kanokogi said her mother had very short hair and wore a T-shirt that flattened her breasts. She never told YMCA competition officials that she was a man when she competed with the Brooklyn Central YMCA team.
“Her coach said, ‘Don’t bring any attention. Just pull a draw,'” Jean Kanokogi said. “I guess she couldn’t help herself and she beat the guy.” 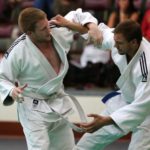