A breakaway at the start of stage three of the ABSA Cape Epic mountain bike race turned the men’s category and general classification on its head as the race moved to Worcester on Wednesday.

Stage three’s transition from Robertson to Worcester might have been the longest stage of this year’s race but with just 1800-metres of ascent spread over 122 kilometres, it was also the flattest. Ideal conditions then for the turbodiesel-powered weapons of Jaroslav Kulhavy (Investec Songo Specialized) and marathon maestros, Alban Lakata and Kristian Hynek (Canyon Topeak).

Despite Tuesday’s gruelling puncture-induced efforts – in which Howard Grotts took tremendous strain chasing back the leaders – it was Investec Songo Specialized who piled on the pressure by driving the pace.

Canyon Topeak proved their early intentions by nabbing the Dimension Data Hotspot ahead of Centurion Vaude. As leaders approached the base of the Pieter’s Express climb, Investec Songo Specialized attacked in what would prove to be the move of the day. Only Canyon Topeak had enough in reserves to board the Czech Express and secure a one-way ticket to HTS Drostdy in Worcester.

‘We got the win at the Dimension Data Hotspot and after that, we just kept on going. Luckily we had Jaro (Kulhavy) on our side – he’s like a locomotive,’ said Lakata.

The breakaway was firmly established at the 29km marker where Investec Songo Specialized gained the virtual lead with a 2min 24.4sec advantage over the yellow jersey group. The strategy of forcing an early split had paid off and, with Kulhavy and Lakata among the firepower, the average speed at the head of the race reached a staggering 28km/h. Further back Cannondale Factory Racing found themselves surrounded by Buff Scott MTB, Trek Selle San Marco 1, Centurion Vaude, BULLS 2 and KMC EKOÏ SRSuntour.

‘It was pretty rough out there. At 122km, it’s the longest stage of the Absa Cape Epic and the guys from Investec Songo Specialized and Canyon Topeak made their move on the first climb and put us in the hurt box,’ said Cannondale’s Manuel Fumic.

Like Tuesday, Investec Songo Specialized’s efforts were thwarted by a series of costly punctures that gave Canyon Topeak the lead. As he showed then, when it comes to chasing, Kulhavy knows only one speed – full gas. With Grotts in tow, the two reduced the gap in a matter of minutes and moved through the Land Rover Technical Terrain together with Canyon Topeak.

With just 15km left to negotiate, Grotts got caught out by a sandy stretch that would ultimately gift Canyon Topeak their first stage win of the 2018 Absa Cape Epic – Lakata’s first since 2010.

‘It’s insane. How crazy was that? It is really cool to win the stage and I was enjoying it the whole day,’ said Lakata.

Lakata went on to praise Kulhavy for his incredible power and the huge efforts he put in on the flats. ‘We are lucky we had him (Jaro) on our side today, he did 80 percent of the work. They (Investec Songo Specialzied) had some flats and Howie (Grotts) was struggling so we got the stage win. We are back in the game.’

Despite finishing just over a minute behind Canyon Topeak, Kulhavy and Grotts were able to steal the yellow jersey away from Cannondale Factory Racing. Grotts, who will become the first American to wear yellow at the Absa Cape Epic, had the following to say about how things played out.

‘It was a good stage and we tried to go for it, said Grotts. ‘I was suffering like a dog out there. It is probably the most I have ever suffered in any race but it was worth it – we are also in yellow so that’s great.’

For Cannondale Factory Racing it was a day of damage control as Fumic and Henrique Avancini began a chase back of their own after leaving the Buff Scott MTB team behind on the Land Rover Technical Terrain.

‘We were trying to ride smartly in the chasing bunch and made a move on the Land Rover Technical Terrain,’ said Fumic. We kept going and time-trialed it to the finish line but it was too late. It’s still a long way to the finish but we are happy.

‘The yellow jersey always feels a little heavy because there is lots of pressure and expectation. Tomorrow looks like it could be a good stage for us with lots of single-track so we will try and put the others in the hurt box.’

The composure shown by Canyon Topeak and the consistent manner in which they’ve approached the race thus far has paid off in a big way. As it stands it’s Investec Songo Specialized who lead Cannondale Factory Racing by 2.12.7 with Canyon Topeak in third, 3.14.4 off the pace. 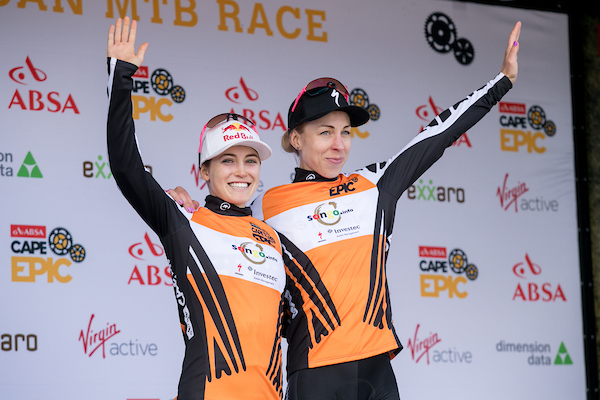 In the women’s race, it was Annika Langvad and Kate Courtney who extended their lead to over 12 minutes with their fourth win in as many days.

Langvad and Courtney were able to power away from their rivals who could do nothing to stop their seemingly unshakable surge to the 2018 title – not even a crash into some other riders near the end, which brought both the leaders down, could stop their progress.

While the three-time women’s category champion and her novice partner were once again handling everything that their rivals, the route and even other slower competitors could throw at them, the good news is that the races for second position on each stage are producing some excitement in what would otherwise be something of a procession.

On Wednesday Langvad and Courtney rode away from their rivals twice, first to claim the women’s hotspot 17km into the stage, and then again with about 40km to go they surged to their race-winning break and built a substantial victory of well over five minutes and extend their overall lead to more than 12 minutes.

Team Spur’s Ariane Lüthi and Githa Michiels and a resurgent Ascendis Health’s Sabine Spitz and Robyn de Groot fought a race-long battle for the runner-up spot. Although both teams spent time chasing their rivals, the positions on the bottom steps of the podium were decided on a sprint with Lüthi and Michiels claiming second, also for the fourth day in a row.

The vanquished pair from Tuesday’s sprint, Mariske Strauss and Annie Last (Silverback-KMC), had a tough day on Wednesday and finished a distant fourth. Strauss and Last are still third overall, but are now 12 minutes behind the Spur duo, and just seven minutes ahead of Ascendis Health, meaning the dice for the third step of the final overall podium is still far from finalised ahead of the final four days’ racing.

Despite their dominant performance over the Prologue and first three stages, Langvad and Courtney know they can take nothing for granted, and the dramas they negotiated on Wednesday proved their point.

‘The thing about this terrain is that it’s so rough and you can have mechanicals,’ said Langvad. ‘Even on paper it looks like a comfortable lead but you still need to perform solidly because it is so unpredictable and a lot of things can happen out there.

‘Today there was some traffic with the guys who started ahead of us, both at the beginning and here near the end,’ added the four-time world champion when talking about the masters and grand masters riders who start five minutes ahead of the UCI Women’s batch.

‘Because of the format, there are guys out there on the course and in the beginning they were a little bit in our way and we had to yell to get them to get out of our way.

‘And then again near the finish it turned a bit sandy and we wanted to overtake one guy and he just stood still … and we both went flying,’ said Langvad, indicating herself and her partner.

Courtney added with a wry smile: ‘It was a bit of somersaulting for us, but we landed in the sand so it was soft.’

Their cautious view was backed up by a very happy five-time race winner Christoph Sauser, who is mentoring both the men’s and women’s Investec Songo Specialized teams that are now both wearing their respective race-leaders jerseys.

‘It is never wrapped up in the Absa Cape Epic. Physically Kate has never done eight days but at least now they do not have to go full gas every day. They just need to try to make up some time at the end of each stage, and if they do not make up time, or even lose a little, as they say it is still a winning day.

‘It is good we have both teams in yellow with quite a bit of time but everything can be put upside down very quickly – you only borrow the jersey on this race.’

Courtney was once again full of praise for her far more experienced partner, giving her lots of the credit for just finishing:

‘That was a really tough day. As a cross-country rider, and a newbie to the race and the stage racing game, 120 kilometres was a lot for me. Luckily for me, Annika, while she is such a champion, is also a great team player and she helped a lot. She took care of me and made sure I stayed within my limit, then when I was over my limit I got to ride the Annika Express home.

‘That allows us to maximise our strengths, get time on the climbs … and allows me to finish!’

In the race for the inaugural Absa African Women’s special jersey, Candice Lill and Amy Beth McDougall (dormakaba) consolidated their already impressive lead. Although McDougall has not been 100% healthy, it seems like only a disaster will rob them of the title. They lead by just under an hour with 14-time race finisher Hannele Steyn and extraordinary ultra-distance athlete Jeannie Dreyer (Nolands Spar) second with Nadia Visser and Katie Lennard (Western Girls) third.

Tokyo looms, again, We don’t know for sure in what shape of form the Olympics and Paralympics will take place in July to September and if anything 2020 taught us to take nothing for granted. What we do know is that if Tokyo 2020 +1 does go ahead, it will do so against a new-found back drop where simply taking… END_OF_DOCUMENT_TOKEN_TO_BE_REPLACED