The national men’s Under-17 football side were held to a 1-1 draw by 10-man Korea at the FIFA World Cup in Chile on Thursday night.
That after they had lost their opening encounter 2-1 to Costa Rica.
Both goals came via the penalty spot at the Estadio Municipal Ester Road in Concepcion.
South Africa attacked from the whistle and were awarded a penalty 10 minutes into the match; when Ri Kuk Hyon brought Luvuyo Mkatshana down in the box and was given a red card. Thendo Mukumela stepped up to give Amajimbos the lead.
But the Amajimbos’ lead did not last very long as Korea won a penalty five minutes later, after a clumsy challenge from Katlego Mohamme forced Ukrainean referee Yevhen Aranovskiy to point to the spot. Kim Wi Song stepped up and equalised for the Koreans.
The rest of the first half saw many missed chances and half chances created by both sides, but the back line of South Africa was often at sixes and sevens due to the pace of Korea.
The second half started with Korea having the upper hand as they had more shots at goal. But they failed to take the lead in the match after numerous opportunities were missed by Han Kwang Song and Choe Song.
Coach Molefi Ntseki then made a tactical change in the 76th minute when Wiseman Meyiwa came on for Kobamelo Kodisang, with South Africa needing some stability at the back. Notha Ngcobo then came on for Simon Nqoi in the 83rd minute, but still no goals came from this.
The match ended on a high as the crowd cheered on Mondi Mpoto who moved from his goals to play upfield alongside his teammates as they searched for a late winner. However that goal simply would not come.
South Africa and Korea now have one point each in Group E, but still sit bottom of the log standings in that order. Russia and Costa Rica are first and second in the group with four points each.
The Amajimbos will now face Russia in their last group E match on Sunday (7pm). 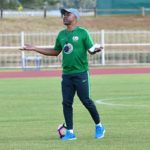 Banyana looking to bounce back against Senegal

Tokyo looms, again, We don’t know for sure in what shape of form the Olympics and Paralympics will take place in July to September and if anything 2020 taught us to take nothing for granted. What we do know is that if Tokyo 2020 +1 does go ahead, it will do so against a new-found back drop where simply taking… END_OF_DOCUMENT_TOKEN_TO_BE_REPLACED