The championships will take place┬á in Nairobi, Kenya from 28 July-1 August.

Fresh from clearing a career best 5.50 metres in the pole vault at the Yellow Pages SA Youth and Junior Championships in Germiston at the weekend, Cheyne Rahme has been included, along with 1500m star Juan van Deventer, 5000 and 10┬á000m talent Stephen Mokoka and one of the most-improved athletes of the local season – 400m hurdler Cornel Fredericks.

Among the women, Mapaseka Makanya and Lebogang Phalula will be in search of medals in the 800m, while Phalula’s twin sister Lebo, will join Rene Kalmer in 1500 and 5000m action.

Hammer throwers in African record-holder Chris Harmse (with a season best of 75.36)┬á and George-based SA schools, junior and senior national champion Annemie Smith (with a 2010 furthest throw of 57.13), are also on the national selectors’ list.

In congratulating the athletes on their selection to the national squad, ASA administrator Ray Mali said: ÔÇ£To assist the athletes in their final preparation ahead of the African athletics showpiece in Nairobi, ASA will endeavour to organise competition opportunities in the six weeks leading up to July 6, on which date the final team will be announced.ÔÇØ

ÔÇ£Athletes not listed on the national squad announced today, can still qualify for the CAA Africa Senior Championships provided that they meet the selection criteria during the ‘window period’ in June and July,ÔÇØ added Mali.

Hezekiel Sepeng, the Olympic 800 metres star of the 1990s, joined ASA this week to assist on athletes’ support structures and will play an important role in passing on advice to athletes and their coaches, during the build up period over the next two months and a half months prior to the final team announcement. 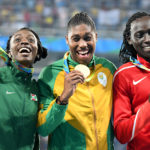 Semenya could be awarded a second Olympic gold