London Olympics hopeful Richard Murray lines up for his last ITU event of the season in Mexico on Sunday in a positive frame of mind.

It’s the Cape Town triathlete’s last chance for Olympic Games points this year and he wants to make his mark in Mexico. “This Huatulco World Cup will be my last ‘big’ chance of ITU points and Olympic Ranking points for 2011 and my thoughts going in are very positive indeed,” he told Road to London 2012 on Saturday.

“Recently winning the BSG-Energade Series opener at alittude, has shown me that my swim has improved over the last few months of European racing and training, now its time to put it to the test.”

“This route is said to be the toughest ITU course out there, with water temp of 28C degrees, high humidity, heat, a big hill on the bike and to top it off a hard run with a big hill in it.

“I’m hoping to have a great swim this time, hang in there on the bike… and soldier my way towards a top 15 place, that’s if everything goes well.”

It was tough planning this event for Murray with a fair bit of juggling and weighing of options. “I need Olympic ranking points, but I dont want to race ITU events past November into 2012.

“So I chose the Mexico World Cup, as I would still be fresh from World Championship in Beijing, China, and thus have a better chance at a good race than the other ITU events later in this year.”

And it’s a tough old world out there on the triathlon scene. Murray knows all about it. “ITU racing is very, very different to local racing in SA, and if you are not in the right state of mind or are not 100% prepared… a top 30 seems impossible.

“But here’s hoping all gpes well this weekend, and that I do myself, my family and country proud,” concluded a confident Murray. 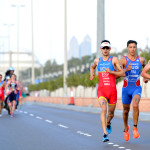 Murray medals in Abu Dhabi, and Schoeman is also in the mix

By GARY LEMKE in Tokyo On the third day of staying in the Paralympic village bubble “it” finally dawned on me. “It” wasn’t the sheer visual aspect of the 4 000-plus Paralympians with disabilities all in the same environment of towering 17-storey apartments and surrounded by a 4km perimeter fence. Admittedly, that is the initial and most common conclusion of… END_OF_DOCUMENT_TOKEN_TO_BE_REPLACED