Two-time Olympian Richard Murray raced to his most prestigious victory yet at the weekend, winning his first Olympic distance triathlon in Leeds, England, writes MARK ETHERIDGE.

Putting aside recent problems with a painful back injury, he roared to the win in the WTS event known as the AJ Bell World Triathlon Leeds.

He used his running prowess to brilliant effect as he put the hammer down at the start of the 10km run and no one was able to stay with him.

Murray’s compatriot and Commonwealth gold medallist Henri Schoeman was unable to deliver his best on the day, not even leading out of the water, and was 15th in 1:47:58. A third South African, former world junior champion Wian Sullwald failed to finish.

An ecstatic Murray told Team SA as he headed back to his training base in the Netherlands: ‘Wow, I can’t really say I expected it to come now, but I’m super, super happy with my first WTS Olympic distance race.

‘It’s been 10 years in the making – always wanting to win a WTS Olympic distance event. In fact, it’s been my biggest goal since I was 18 years old. I’ve won two sprints now and this feels magical.’

‘At last, all the hard work and training has paid off, especially after a very hard last few months.’

‘We changed things around the last few weeks as things weren’t going great.’

On the race itself though, things didn’t start off great either. ‘My swim wasn’t great, pretty shoddy, but I tried my best to stay in contention and was 50 seconds back into T1. But on the bike, I pulled back and ended up with the second fastest bike split behind Kristian Blummenfelt [Norway]. He kept biking very hard, and I just kept “quiet” and sat in a good spot,’ said Murray.

‘On the run, the legs felt really great. The last time I was in London, I came second behind Mario at the WTS and now I have beaten him for the first time in an Olympic distance and I couldn’t be happier.’

He took time out to thank his loyal support back home.

‘I must give a shout-out to the SA supporters who gave me huge support. My family, friends, coaches, girlfriend Rachel [Klamer], her family who looked after us so well and them my sponsors, Specialized, Red Bull, Havoline, Orca, Puma, Oakley… there are just so many guys behind the scenes who believe in me and know what I can do.

‘Now I just hope I can continue in his way and head towards my next big goal, the Tokyo Olympics, two years down the line.’

The only South African woman in the Leeds lineup was London-based Gillian Sanders and she had the misfortune of crashing on the bike leg once again and not being able to finish as Great Britain supplied the winner and runner-up in the form of Vicky Holland and Georgia Taylor-Brown with American Katie Zaferes completing the podium. 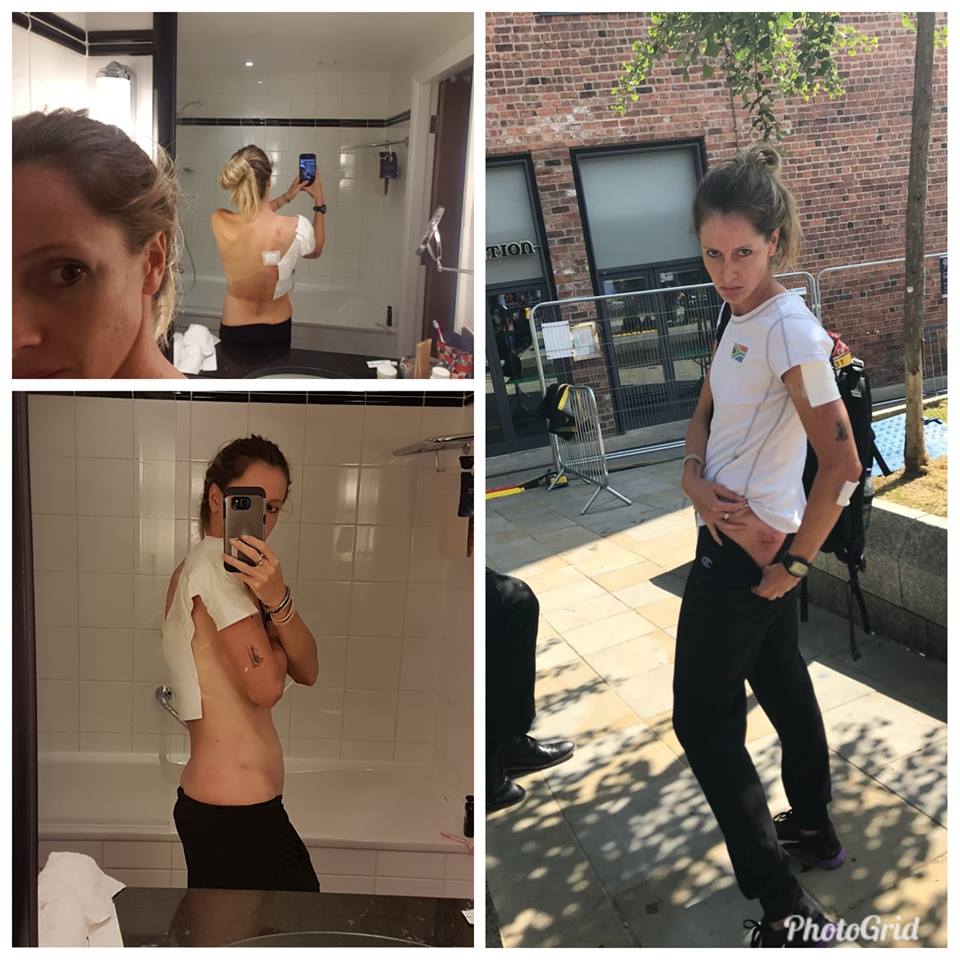 From no crashes in six years of WTS competition, Sanders has now hit the dirt twice in the space of 13 weeks after cracking some ribs in the Abu Dhabi leg of the series earlier this year.

‘I got taken out again. I can’t believe it,’ Sanders told Team SA as she returned to her London home to assess the damage (see above).

‘A Japanese girl caused the crash and then Iceland’s Edda Hannesdottir rode over me so I think that bruised the ribs. I just had nowhere to go. Not her fault. And I had a decent swim so quite annoyed.

‘Hopefully, most of it is superficial. Ribs and coccyx are bruised and there’s some road rash. We were cycling around 40km/h and I hit my head too. Luckily for helmets or we’d be dead!’

Photo: Murray breaks the tape in Leeds and Sanders checking out her war wounds, by Janos M. Schmidt, James Beckinsale and Gillian Sanders

Tokyo looms, again, We don’t know for sure in what shape of form the Olympics and Paralympics will take place in July to September and if anything 2020 taught us to take nothing for granted. What we do know is that if Tokyo 2020 +1 does go ahead, it will do so against a new-found back drop where simply taking… END_OF_DOCUMENT_TOKEN_TO_BE_REPLACED