Led by Richard Murray, three of South Africa’s leading triathletes had solid successes around Europe at the weekend.

There was double delight for Murray as his Dutch girlfriend, Rachel Klamer ,won the women’s race in 61:24, meaning it’s the first time that she and Murray have been on the podium at the same event.

In the same race, SA youngster Celeste Renaud was 27th, the Capetonian clocking 66:43.

Another two-time Olympian, Gillian Sanders, was 18th in the French Grand Prix in Valence, Spain. She ran 62:33 in a race won by the host nation’s Cassandre Beaugrand in 58:41.

‘It was a lot of fun, although my body was exhausted after a really solid three weeks training since being ill,’ said Sanders (pictured above) from her base back in London. ‘I’ve never had such tired legs in a race before, so that was a huge challenge in itself.

‘I was still doing a hard hills session on the bike on Thursday, so I used the race as a training session and a solid hit out before Hamburg, and it was also good to get a race in the body after being ill.

‘There was nothing special about my race, it was a bit of a slog from start to finish, but with a field reminiscent of that of a World Series at the pointy end I was satisfied with 18th and helped my team Chateauroux move up the General Classifications to seventh (out of 16).

‘Now it’s definitely time to freshen this body up before Hamburg.’

And in Spain Australia-based Anel Radford was racing the Altafulla Continental Cup, where she ended sixth in a time of 66:22 as American Summer Cook won in 63:50.

‘I’ve put in a solid block of training since the Cagliari World Cup and was keen to test some focus areas under race conditions and training fatigue,’ said Radford.

‘This race was the perfect race for that. It’s just south of Barcelona and a road trip away from Vitoria Gasteiz, where I’m based.

‘I can’t remember the last time I raced without getting on a plane or having to pack and unpack my bike. The course was a lot of fun; a beach start and ocean swim and a hilly, technical bike made for some exciting racing.

‘I had a strong swim and worked hard on the bike. I cramped a bit coming off the bike, but luckily managed to run that out in the first 1.5km to finish in sixth position. It was a short two-day trip, but a great hit out before Hamburg. I’m back to Vitoria Gasteiz for the last bit of prep and happy with where everything is at at the moment.’ 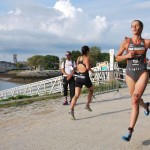 Champion Carina back to defend title

By GARY LEMKE in Tokyo On the third day of staying in the Paralympic village bubble “it” finally dawned on me. “It” wasn’t the sheer visual aspect of the 4 000-plus Paralympians with disabilities all in the same environment of towering 17-storey apartments and surrounded by a 4km perimeter fence. Admittedly, that is the initial and most common conclusion of… END_OF_DOCUMENT_TOKEN_TO_BE_REPLACED